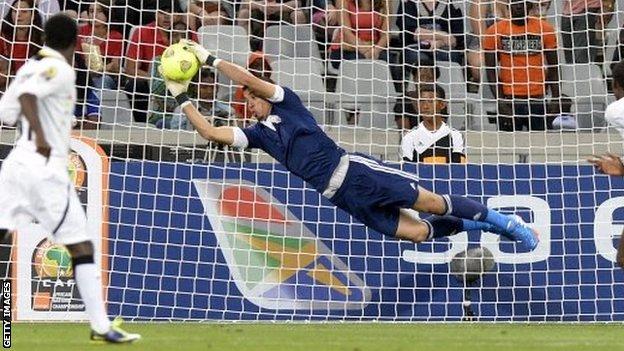 The African Nations Championship final had finished 0-0 after 90 minutes before Joshua Tijani missed the crucial spot-kick to give Libya victory.

Ghana's Abdul Mohamed had the best chance to win the match in extra-time but put his shot wide.

Both goalkeepers then saved two penalties each in the shoot-out before Tijani missed the target.

It was originally intended that Libya would be the hosts of the tournament, but the civil unrest in the country meant that the event ended up taking place in South Africa instead.

In the final, a heavy schedule took its toll on both teams.

After a run of six games in the space of 20 days, including extra-time in each of Wednesday's semi finals, they struggled to create any clear-cut scoring chances in the regular 90 minutes.

Both sides spurned good chances to break the deadlock in the second period of extra time. First Mohamed saw his shot roll tantalisingly past the right upright and a few minutes later Libya's Abdelsalam Omar, unmarked in the six-yard box, had his header well saved from point blank range by Ghana goalkeeper Stephen Adams.

Given the history of past matches between these two countries, extra time came as no surprise.

Their previous two meetings in the group stages of this year's competition and the 2009 event ended in 1-1 draws, while Ghana won the penalty shoot-out in the 1982 Africa Cup of Nations final after the teams finished level at 1-1 after extra time.