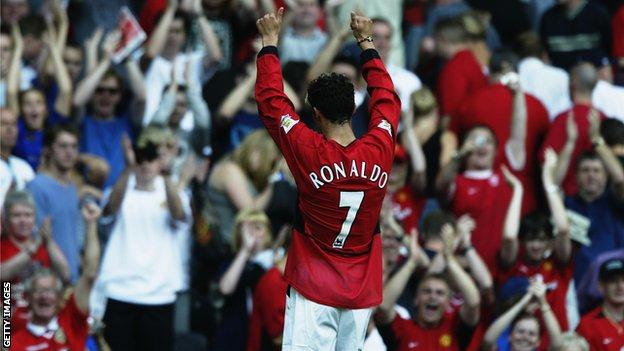 A spindly teenager with an unruly mop of curly hair strides through the corridors of Manchester United's Carrington training complex and embarks on his path to greatness.

The first time I met him was when I was away with United. We were in Portugal and he could've scored a hat-trick that day

The 18-year-old makes his way into the gym and sees a vision beyond the ocean of dumbbells, cardiovascular machines and medicine balls.

He sees a culture of success and witnesses the camaraderie that binds together a group of winners with the same thirst for improvement.

All the while, he envisages stitching his own patchwork around the template laid out before him and extracting every last ounce of potential from the talents gifted to him.

Cristiano Ronaldo's speed and skill were evident at the Estadio Jose Alvalde in a friendly against Manchester United for Sporting Lisbon in August 2003, assets and a performance which ultimately sealed a £12.24m transfer to Old Trafford days later.

It was in Manchester that the Portuguese sought out the expertise of a man by the name of Mike Clegg - the Old Trafford club's power development coach between 2000 and 2011 - as he began his quest to not only become the greatest player on earth, but an athlete with no equal in the modern game.

"He was a lively lad," Clegg told BBC Sport. "Carlos Queiroz was instrumental in getting him to United, but Sir Alex Ferguson did most of the talking and I observed the lad in front of me.

"He came across as a really determined boy and Ferguson and Carlos really liked that about him, but I didn't realise quite how determined he was until he came into Carrington and I got speaking to him.

"Ronaldo was a natural talent, a rough diamond, but he crammed in thousands and thousands of hours of graft to turn himself into the perfect player.

"I look at the other players who come and go with talent. Nani and Anderson both came in during 2007 at a similar age to Ronaldo, but the difference was astronomical. The difference was the understanding and the knowledge of how to become the best. Ronaldo was above everyone else."

The use of resistance-based workouts were unheard of at Carrington prior to Clegg's arrival, but football's evolution into a game dominated by athletes was just beginning, as basic programmes were introduced to improve functional, football-related strength among the squad.

Players were initially trained to become proficient in the art of bench-pressing, pull-ups, dips and squats - now the staple gym diet of a top-level footballer.

Ryan Giggs, a man Clegg describes as the most open-minded to new training techniques, Roy Keane, a lover of boxing during his recuperation from a serious knee injury, and Paul Scholes, the star pupil during cognitive and peripheral vision tests, were three leading members of a gym culture that formed in the aftermath of United's treble-winning success at the turn of the millennium.

Ronaldo was a keen observer. A vacancy had arisen to join that elite group following the departure of David Beckham - another member of the 'gym club' - to Real Madrid, and though his English was limited at best and his frame more featherweight boxer than sculpted Adonis, Ronaldo wasted little time in turning his vision into reality.

His physical evolution incorporated all facets of athletic performance, with additional sprint and reaction work polishing up his raw, genetic gifts.

But it was the mastering of strength workouts and Olympic lifts - total body exercises performed in an explosive manner at pace - that were behind the development of a muscular physique that has gone on to adorn billboards and magazine covers across the world.

Deadlifts and power cleans were two favourites in his gym routine, with the level of resistance and speed of execution slowly increased over his near six years in Manchester.

Clegg added: "I would say, physically, he is the perfect specimen. From his height to his natural body type, muscular structure, how much fat he's got in his system, his endurance capacity, flexibility, power and strength - they are in perfect balance.

It seems strange looking back, but in Ronaldo's early years at the Theatre of Dreams there were doubts he would make the grade at all.

He's always improving and because of that, he is the best.

His penchant for showboating rather than delivering the final pass and a fondness for falling over the outstretched legs of defenders a little too theatrically angered team-mates and opposition alike.

Each season, his manager, mentor and the man the 28-year-old still refers to as 'boss', Sir Alex Ferguson, would agree a pre-season wager over a target number of goals for the campaign. At the end of each of his first two seasons at the club, targets of 10 and 15 goals proved beyond him.

He wasn't fazed. The sight of Ronaldo strapping weights to his ankles and perfecting step-overs long after his team-mates had headed for the showers became a common sight at Carrington.

He invested in himself financially too. The purchase of a house with a custom-built swimming pool to aid him in his recovery after sessions and matches was another sensible addition, while the hiring of a chef at his home ensured his diet was faultless.

Clegg said: "For every mistake he made in a game, he'd spend hours and hours and hours practising to make sure it didn't happen again. Generally with players, if they try something and it doesn't work, they don't try it again, they fear it - but he didn't. No chance.

"We did speed, power and reaction work, everything he needed and worked with on the pitch. So much of my work was tailored around him. I even went to Montreal and looked at cognitive devices and different ways of working that would extract that extra ounce out of him."

The hard work paid handsome dividends. Ronaldo lifted a hat-trick of Premier League titles between 2007 and 2009, as well as the Champions League in 2008 - a success which saw him named World Player of the Year for the first time that same year.

In his own mind, his time at Old Trafford was done.

"He said to me, 'Mike, this is it. I've done everything here, I'm going to move on'. He supported Real Madrid and he knew it was time to leave," says Clegg.

"He'd have loads of little sayings, 'Manchester, it's raining all the time,' he used to say, but he loved being here, yet he knew he was on a journey and he knew it was going to take him somewhere else."

That somewhere else was the Santiago Bernabeu, with destiny - and the small matter of a then world-record £80m transfer fee - seeing him move from United to Real Madrid in 2009.

Trophies have been harder to come by in Spain, with Ronaldo winning one La Liga,one Copa del Rey and the Supercopa de Espana in his four years there to date, but on an individual basis he continues to surpass his own remarkable standards.

In 2013 alone, the Portugal captain scored 66 goals in 56 appearances and is already Madrid's fifth-highest goalscorer of all-time.

There is surely little room left for improvement, but Middlesbrough boss Aitor Karanka, who worked alongside Ronaldo at Madrid for three years as Jose Mourinho's assistant, believes he can still get even better.

"I had the pleasure of working with Cristiano every day. Ronaldo and Lionel Messi are definitely the two best players in the world," said the former Spain international.

"I think the difference is tiny between them both but I think when you look at the number of goals he has scored over the past year, then Ronaldo is the best.

"Ronaldo improves every day. Look at his numbers three years ago and you think, 'It's impossible he can do better,' and then you look at him this year and he's done better again.

"He's always improving and because of that, he is the best."

The Real Madrid player claimed the 2013 Fifa Ballon d'Or prize in Zurich on Monday, the second time he has been voted the world's best player.

Few who spent time around the gyms at Manchester United and Real Madrid would argue he deserves anything less.