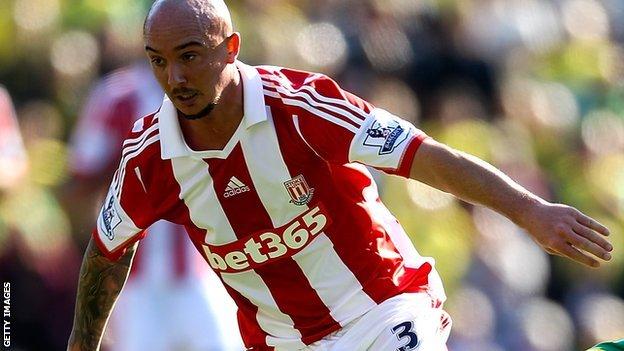 Stoke City have turned the season-long loan signing of Stephen Ireland from Aston Villa into a permanent move.

The deal for the midfielder has allowed Stoke to bring in striker John Guidetti, 21, on loan from Manchester City for the rest of the season.

Clubs can have two loan players from another top-flight club at one time, and Liverpool's Oussama Assaidi is also on a temporary deal with the Potters.

"He (Guidetti) is someone who if you get him in the right areas will make the most of opportunities that come his way because he's a natural goal-scorer."

"Stephen is a talented footballer and has shown what he's capable of since he joined us," Potters boss Mark Hughes told the club's website.

"We're delighted to have made his switch a permanent arrangement.

Guidetti joined Manchester City at the age of 16 after impressing then-manager Sven-Goran Eriksson.

But he is yet to make a league appearance for them, spending time on loan with Burnley and Feyenoord, and scoring 20 goals in 23 games in the Netherlands during the 2011-12 campaign.

Hughes, who replaced Eriksson at Manchester City in 2008, said: "We wanted to try to add different options to our attacking threat and John will certainly do that.

"He's someone who, if you get him in the right areas, will make the most of opportunities that come his way because he's a natural goal-scorer.

"There were several clubs who were interested in taking him on loan and we're delighted that he has chosen to join us."