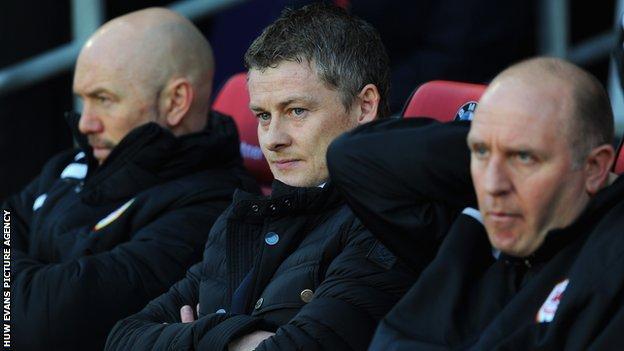 Ex-Cardiff striker Nathan Blake is concerned by the Bluebirds' form and is worried about their chances of staying in the Premier League.

Cardiff, now managed by Ole Gunnar Solskjaer, dropped into the relegation zone for the first time this season after a 2-0 home defeat to West Ham.

With teams around them starting to pick up points, Blake feels his former side must improve quickly.

"We haven't played well for probably a month or so now," Blake said.

"We're not playing like a team who looks like getting out of the relegation zone. Crystal Palace, they're playing a lot better, Sunderland are on a good run.

For Cardiff and Swansea, February is going to be a massive month in the history of both clubs

"One good result [against] Newcastle in the [FA] Cup - take that out and you're looking at league form we're probably in the bottom two or three."

Cardiff have picked up only one point in the five league games since their last win, a 1-0 victory over West Bromwich Albion on 14 December.

Solskjaer is confident his new side will stay up despite seeing them lose his first Premier League game in charge against West Ham.

South Wales rivals Swansea City are just three points clear of Cardiff and the relegation zone, with the sides meeting at the Liberty Stadium on 8 February.

Swansea boss Michael Laudrup says four of Swansea's next five games, including the Cardiff match, are against "tie-break opponents" in their bid to survive in the Premier League.

Former Wales striker Ian Walsh, who played for both teams, thinks results over the next month will define both clubs' seasons.

"For Cardiff and Swansea, February is going to be a massive month in the history of both clubs," Walsh told Radio Wales Sport.

"As Laudrup has said you win two games and all of a sudden you give yourself a little bit of a breather.

"You lose two games and you're dragged down. It's as important as that."