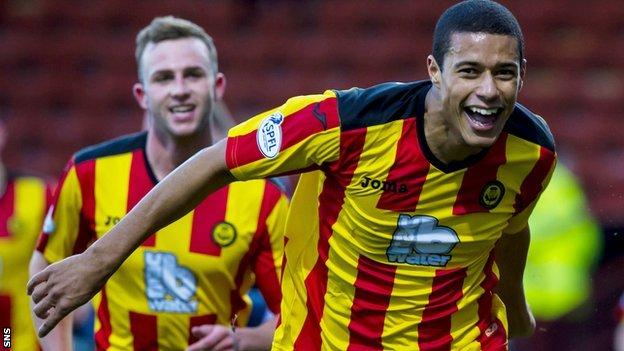 Partick Thistle striker Kris Doolan insists he was happy to see loan signing Lyle Taylor make his mark after replacing him in the Firhill side.

"Obviously I want to be playing, but Lyle has come in and started great and I was delighted to see him get off the mark," said Doolan.

"I'll bide my time until I'm needed and I'll be ready."

The problem all season has been not scoring enough goals. Now hopefully we can continue to put the ball in the net and pick up more points

Doolan had been an ever-present for the Scottish Premiership side this season and is Thistle's top scorer with seven goals.

"There's competition all over the pitch, but that's healthy in any team and it can only make you a better player," said Doolan. "I'm happy to keep fighting for my place.

"But between the two of us there are plenty of goals, whether one of us or both of us are playing, there will be goals."

Manager Alan Archibald admitted it was difficult to leave Doolan out the team, but he has assured the player he is central to his plans.

"When Lyle first came, we gave him a run-out to get games and then he gave us that wee bit extra and then he scored," said Archibald.

"He has given us a new dimension to be honest.

"To be fair to Kris, it has probably given him a chance to get a rest. Not that he would want a rest, but there's been a big onus on him this season to perform in every game and produce the goods for us, which he has done.

"Kris knows he is a big part of my plans. He was one of the first guys I wanted to sign when I got the job and he'll come again.

"No doubt he will start a game in the near future."

Meanwhile, Taylor believes he can add the goal threat that can steer Thistle clear of relegation.

"The problem all season has been not scoring enough goals," he told BBC Scotland. "Now hopefully we can continue to put the ball in the net and pick up more points.

"And I don't think we'll have a problem, because we create chances and we create different opportunities for players all over the pitch.

"We just need to consistently put the ball in the net and I think we'll be okay."

However, Taylor still believes his long-term future lies in Sheffield, where he fell out of favour after the departure of David Weir as manager.

"As far as I'm aware, I'm on loan for five or six months and I'll be going back down to Sheffield United come the end of the season ready for pre-season," he said.

"It is a hard league. It is very physical and fast-paced, but I don't see any reason why I can't do well at that level.

"But it was 10 minutes here and there in odd games and not very many starts, but that's what happened and I've been given another chance to play games.

"When I came up here, the boys were eight games unbeaten, so I can't really complain that I should have been in the team."