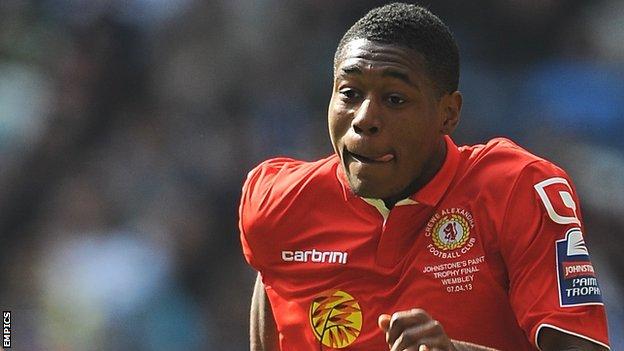 Crewe Alexandra climbed out of the League One relegation zone with a battling win over MK Dons.

The Dons had the better chances in the first half, Dele Alli going close on three occasions before Samir Carruthers hit the bar with a fine shot.

But Chuks Aneke put the Alex ahead with a curling 20-yard free kick.

And after Dons wasted a great chance to level when a Shaun Williams penalty was saved by Ben Garratt, AJ Leitch-Smith coolly slotted home to make it 2-0.

Leitch-Smith's goal was only his second of the season - and his first since 7 September.

Crewe are now a point above the bottom four, having climbed to 19th in the table, while the Dons remain eight points adrift of the play-off places.

"AJ finished his goal smartly and everyone was delighted for him because he is one of our own and we want him to do well.

"But, if I'm honest, I considered taking him off at half-time.

"I told him at the break that he needed to get himself going and, to his credit, he did.

"He worked very hard for us in the second half, got his chance and he didn't show any lack of confidence."

"The game hinged on us being very good for 30 minutes and then us losing discipline.

"We became too offensive, too open, too expansive.

"It was like the parting of the Red Sea at times. We've conceded 15 goals in the last seven games and I've told them it's not acceptable.

"I felt our front players weren't on their game. Too many people did their own thing from an eagerness to do too much."