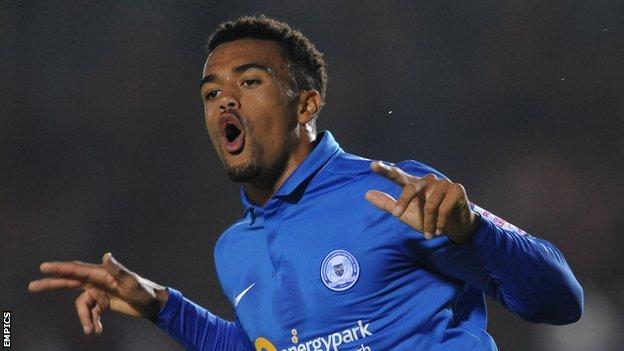 Nicky Ajose scored a hat-trick as Peterborough came from behind to beat 10-man Notts County.

Enoch Showunmi and Ronan Murray put the visitors 2-0 up after seven minutes.

Murray was then red carded for lashing out at Danny Swanson and Ajose fired in to pull one back, before Britt Assombalonga's header and Ajose's sweet strike gave Posh the lead.

Jack Grealish's deflected effort looked to have earned Notts a point but Ajose scrambled in the winner.

Former Manchester United youngster Ajose had not scored for Peterborough until the weekend after two and a half years at the club, but now has four in two games.

His late goal from Grant McCann's corner moves Posh up to fifth.

Notts showed the progress they have made under boss Shaun Derry, with this defeat ending a three-game winning run, but they remain a point above the relegation zone.

"We haven't been winning games and we won. That's what it's about at the moment - getting that belief and confidence back.

"The players showed tremendous character to come back from 2-0 down and the big blow of them equalising for the 3-3.

"That was back to the good old days. I was pleased to see it again."

"I was absolutely delighted with the way we were always in the game.

"We approached the game with a plan and it worked an absolute treat. Under different circumstances I would have been a victorious manager.

"At 3-3 I thought we were coming away with a fantastic point. Regardless of only having 10 men it was a disappointing fourth goal that we conceded and we couldn't recover from it."