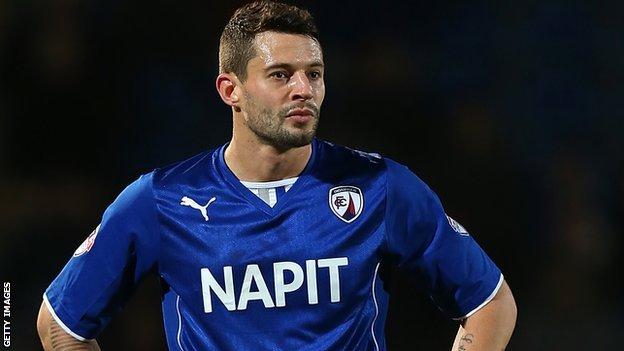 Rochdale scored twice in injury time to snatch a draw against promotion rivals Chesterfield, who saw Marc Richards sent off.

Midfielder Gary Roberts slotted home Jay O'Shea's neat pass to give the Spireites a first-half lead, before Richards bundled home to make it 2-0.

Peter Vincenti then headed past Tommy Lee to earn the visitors a draw.

The result means Chesterfield miss out on a return to the automatic promotion places in League Two, but move up one place to fourth.

Rochdale remain second in the table - a point off leaders Scunthorpe.

"We made changes and unless you're prepared to make changes, you'll never know. I thought Hendo (Ian Henderson) was absolutely magnificent, Joe Bunney and probably Jack O'Connell, if I'm going to pick three out, but I think the effort was always there.

"The will and the endeavour, you know we do say that "winners never waiver" and I believe we're a winning side with a winning mentality.

"We weren't victims of the situation being two down and I'm really pleased we got something out of the game because obviously this fixture was brought forward against my wishes - and I do believe we should have had more help off the Football League in our preparation for the FA Cup, but we didn't."