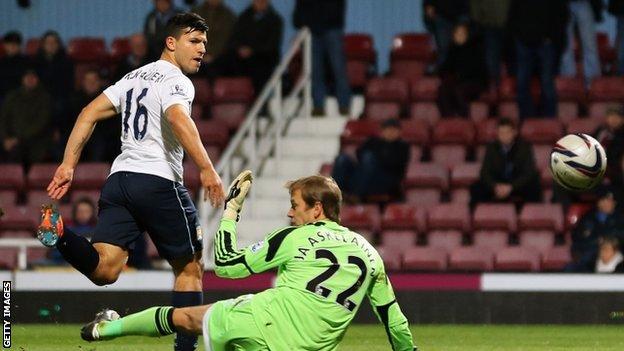 An unmarked Negredo nodded in, Aguero clipped past Jussi Jaaskelainen and the Spaniard barged through to net.

City will face either Manchester United or Sunderland at Wembley on 2 March.

Cross-city rivals United host Sunderland in their semi-final second leg on Wednesday as they try to overturn a 2-1 home win in the reverse fixture.

Blues boss Manuel Pellegrini has targeted the unprecedented 'quadruple' of winning the Premier League, FA Cup, League Cup and Champions League in his first season at the Etihad.

And City, as expected, are already just 90 minutes from lifting their first trophy of the campaign after recording the biggest aggregate win in the League Cup semi-finals.

Pellegrini made sweeping changes to the side which smashed through the 100-goal barrier in only their 34th match of the season on Saturday.

But, to the chagrin of West Ham, the Chilean reunited Negredo and Aguero in a fearsome-looking attack, while injury-hit £22m summer signing Stevan Jovetic made his first substitute appearance since October.

Going into the game, the pair had scored 21 goals apiece - with the whole West Ham team netting only 31 - but had not started together since Argentina striker Aguero injured his calf against Arsenal on 14 December.

Negredo needed just 154 seconds to open the scoring when he planted in Portuguese teenager Marcos Lopez's pinpoint cross with the freedom of the Hammers penalty area.

Then, Aguero kept pace with his strike partner by pouncing on more calamitous Hammers defending to clip beyond goalkeeper Jussi Jaaskelainen.

And, after collecting a neat one-two from Aguero, Negredo surged through a pair of flimsy Hammers challenges to tuck past Jaaskelainen.

With West Ham needing almost a miracle to reach Wembley, Allardyce urged his players to restore pride in front of a sparse 14,390 crowd in east London.

But the home fans had little to cheer with City keeper Costel Pantilimon only stretched on a handful of occasions.

Mohamed Diame, who was later carried off on a stretcher with a knee injury, slashed an angled shot wide and substitute Carlton Cole was denied by the feet of the giant Romanian.

However, the hosts were boosted by an encouraging 45-minute display from Andy Carroll, who was making his first Hammers start since the final game of last season after a foot injury.

The England striker was the Hammers' most potent attacking threat before being replaced by Cole at the break, although showed his rustiness by heading over the City crossbar when well-placed.

"The most disappointing thing was our defensive unit doing what it did in the first few minutes. Manchester City are a super, super team but it was not a super, super opening goal.

"It was bog-standard defending, which was disappointing. You cannot make the amount of mistakes at this level that we did.

"Obviously we were disappointed to lose Joe Cole and Mo Diame to injuries, but we'll have to see how serious they are. Mo's injury might not have been as serious as it first looked."

"It was a very professional performance. It was easy to think the game was finished from the 6-0 in the first leg, but it was important to reach the final winning all the games.

"For Sergio Aguero, it was useful match as he played 60 minutes.

"Alvaro Negredo has a problem with his shoulder. He has pain at the moment and we will see if it is serious on Wednesday."