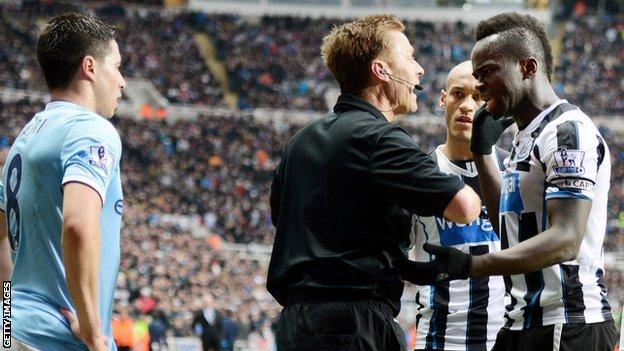 Mike Jones, who refereed Sunday's Premier League match between Newcastle and Manchester City, will not take charge of a game this weekend.

Newcastle's Mapou Yanga-Mbiwa was shown only a yellow card for a challenge that injured Samir Nasri.

Law 11 in the FA rulebook

Jones will be the fourth official at Saturday's match between Sunderland and Southampton.

Newcastle manager Alan Pardew said the decision to disallow the goal was an "injustice", while former Premier League referee Alan Wiley told BBC Radio 5 live that Jones made "an error of judgement".

Jones ruled Yoan Gouffran was offside when a 25-yard shot from Tiote went into the net.

Wiley added: "We can all see that he [Gouffran] is not in front of the goalkeeper. The goal should have stood."

Nasri was carried off on a stretcher following Yanga-Mbiwa's tackle and has since been ruled out for eight weeks with a medial knee ligament injury.

"It's not a tackle. I think it is a kick and it should be a red card," said Wiley.