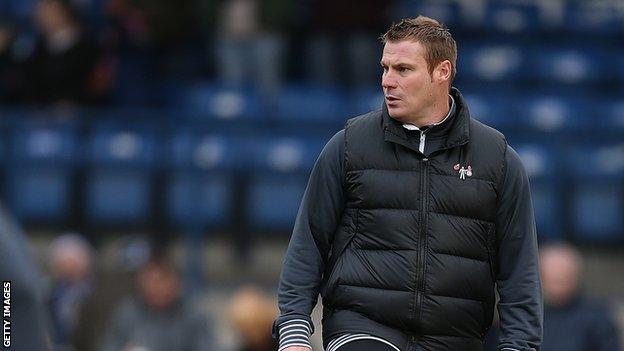 Bury manager David Flitcroft wants to add players with "game knowledge" to his squad during the transfer window.

Defenders James Burke, Frederic Veseli, Pablo Mills and Robbie McIntyre have all arrived since the turn of the year.

And Flitcroft, who was hopes to further supplement his squad before the end of January.

"It's that middle range - that bracket of 25 to 30-year-olds that have been around the game and know the game, but are still dynamic," he said.

While 29-year-old Mills has a wealth of experience from a decade in the professional game, the other three new signings joined the Shakers with only three senior appearances between them.

And former Barnsley boss Flitcroft told BBC Radio Manchester that assembling a competitive squad for next season and beyond is important to him.

"The likes of Burke and McIntyre - they've not played many league games between them," he added.

"They're probably not signings for now, but they're good players to develop and good characters."

Bury have taken eight points from their first six matches under Flitcroft, who turned 40 on Tuesday.

However, a three-game unbeaten sequence came to an end with a on Saturday, a result that left them 19th in League Two and only one point above the relegation zone.