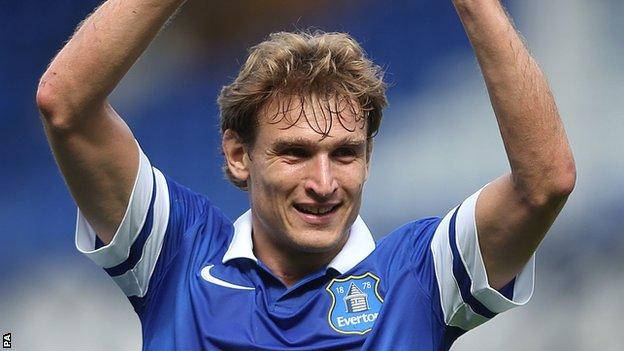 Hull City have completed the signing of Everton striker Nikica Jelavic on a three-and-a-half-year deal.

The Premier League clubs agreed a fee for the 28-year-old Croatia forward on Saturday, with Jelavic seeking a move to boost his World Cup prospects.

"I hope that we can build on the great start to the season and become a really strong Premier League team over the coming years," he said.

"It is a good club. It didn't take long to realise that it was right for me."

Hull are 10th in the Premier League, five points ahead of the bottom three.

Jelavic, who has only scored three times since the start of 2013, added: "It's a newly promoted club, but I can see straight away that there is a lot of ambition here."

The former Hajduk Split and Rapid Vienna striker joined Everton from Rangers for £5.5m two years ago, scoring nine goals in his first 13 matches for the Toffees.

He was named Premier League Player of the Month for April 2012, and then-manager David Moyes said he had given the Toffees "a really big lift".

But the Croat did not score between 16 March 2013 and 4 January this year, when he netted twice on his first start since September as Everton beat QPR in the FA Cup.

Before the transfer window opened, manager Roberto Martinez made it clear Jelavic could leave Goodison Park.

But his departure leaves the Spaniard short of senior strikers, with summer signing Arouna Kone out for a "long spell" with a knee injury.

Martinez has added Republic of Ireland winger Aiden McGeady to his squad but, with just Romelu Lukaku, Steven Naismith and Apostolos Vellios available, could be tempted to move for another forward this month.

Everton are fifth in the Premier League, a point and a place behind city rivals Liverpool.