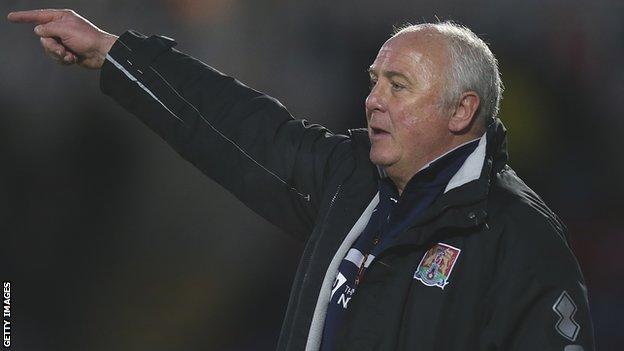 The former Swindon boss also wants a decision made on the full-time manager's position.

King told BBC Radio Northampton: "I'm looking for a certain type, but I won't bring one in for the sake of it or the same as what I've got.

"I need them for longer than a month, and I think I need to be that - it's time to make that decision."

King has overseen two defeats, a draw and a win during his four matches in charge since Aidy Boothroyd's sacking, with the Cobblers now four points adrift of safety.

I brought Paul Reid in so there's no issues with that. But decisions are made sometimes and sometimes they're not nice.

And regarding his future as boss, he added: "How long can this go on for, this uncertainty? It can't go on forever, for me and the club.

"The chairman will do everything to make sure it [relegation] doesn't happen, and he backs [the club] with his money.

"It's taking a long time to make a decision so there must be doubt there. But he'll make the right decision and I'll back him whatever decision that is."

Meanwhile Roy O'Donovan has returned from his trip to Dubai to discuss a possible move to Brunei DPMM and is back in training.

"With Roy coming back in, I'd still be looking for another striker," added King. "I thought we played well in patches [against York] but we didn't have a physical threat."

Meanwhile, the Cobblers boss admits that a difficult decision may have to be made about Paul Reid, whose contract expires towards the end of January.

The defender returned to Sixfields in September after leaving Scunthorpe last summer.

"I brought Paul Reid in so there's no issues with that. But decisions are made sometimes and sometimes they're not nice," said King.

"It's not decided yet. Until then, he's got the same opportunities as anyone. He knows the situation - to play well and win football matches."