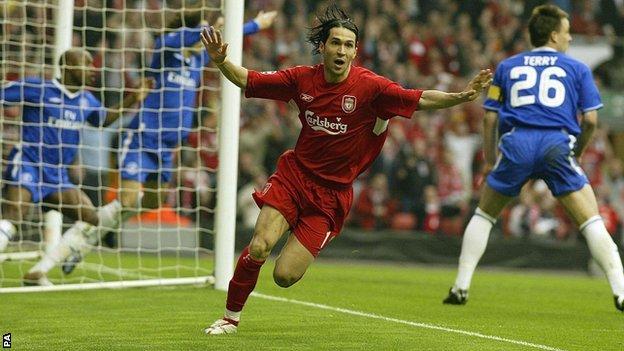 Former Liverpool winger Luis Garcia has retired at the age of 35.

Garcia helped the Reds to win the Champions League in 2005 when Liverpool came back from 3-0 down to beat AC Milan on penalties in the final.

The ex-Spain international had spells at Atletico Madrid and Barcelona before moving to Liverpool in August 2004.

He also played for Racing Santander, Panathinaikos and Puebla before ending his career at Mexican side Pumas UNAM.

Luis Garcia joined Liverpool in August 2004 and scored 30 times in 121 appearances for the Reds.

"There have been many years enjoying what fascinates me, and the opportunity to see fulfilled the dream I had when I was just a kid," said Garcia on his official website.

"I've decided to retire as a professional footballer, thanking the interest of the teams that talked to me in recent weeks, but I think it's time to end this important chapter in my life and move to the next page."

On Liverpool's way to winning Europe's premier competition in 2005, Garcia, who won 20 caps for Spain, scored a controversial goal against Chelsea in the second leg of their semi-final.

Jose Mourinho, who was then in his first stint as Blues manager, claimed the ball had not crossed the line.

Garcia also won the Super Cup in 2005 and FA Cup in 2006 during his three seasons with the Anfield club.