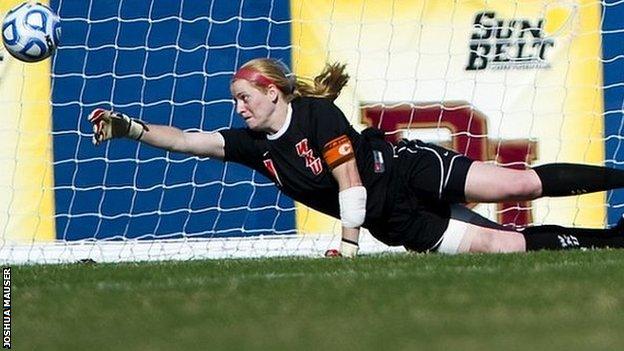 Stout, a United States Under-23 international, is boss Matt Beard's third signing ahead of the 2014 season.

Defender and forward have also linked up with the Reds during pre-season, from Notts County and Arsenal respectively.

"The one place I have always wanted to play is England," said Stout, 23, who also had a spell playing in France.

She told the club website: "To do that and represent Liverpool Ladies is a dream come true. I believe my ability will shine in the WSL and Champions League.

"I hope that my experience, leadership and determination to succeed will only benefit the team as we strive to build on last season's success."

Manager Beard added: "This is a really exciting signing for Liverpool Ladies as we look to continue improving the squad ahead of the new season, which I believe will be the most competitive season ever.

"It is vital we continue to strengthen the team in order to defend our title."