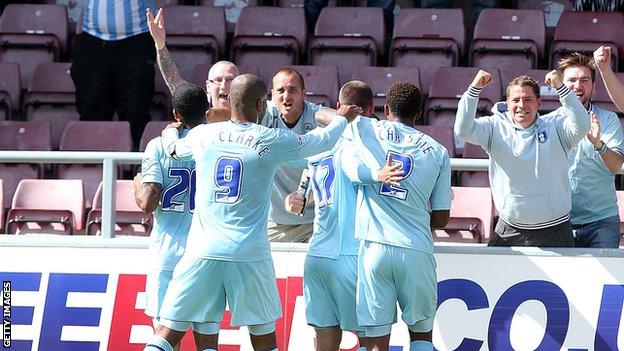 Coventry City have been given clearance to sign new players again following a meeting with the Football League.

Having been placed under a transfer embargo after going into administration last season, Sky Blues boss Steven Pressley has had to operate under market constraints this season.

New players could only be signed by Coventry on a one-in, one-out basis.

But that embargo is now fully lifted as City owners Otium have told the league that new funds have been injected.

Coventry City's development director Steve Waggott said: "We are delighted to be able to resume a more normal service with regard to the future transfer of players.

"We have prudently cut the cost of our first-team squad over the last few months, while maintaining our competitiveness in League One.

"Like all clubs, we still have to fulfil the salary cost management criteria and operate under the Football League's rules and regulations, but to be able to plan in a more normal operational manner is great news, with just the League's usual conditions to meet because of the recent exit from administration.

"A huge thanks must go to the owner for injecting the required funding to allow us to move into this stronger position."

One piece of business Coventry expect to do during the January window is to find a replacement for City top scorer Leon Clarke, who has asked for a transfer and has already been linked with Championship sides Brighton and Barnsley, as well as his first club Wolves.

The Sky Blues, who stand 11th in the Championship table, would currently be occupying fifth place, but for their pre-season 10-point penalty for being in administration.