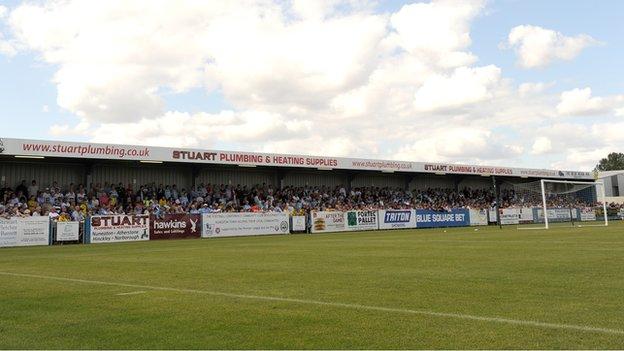 Nuneaton Town owner Ian Neale is planning to step down after six years in charge at Liberty Way.

Neale took over as chairman in April 2008, just prior to their old club Nuneaton Borough's liquidation.

"I can confirm I am in talks with a number of interested parties to secure the long-term future of not just the club, but also in the interests of the town," said Neale.

Neale added: "At the time, I did say I did not know how long I would be here and that, if I felt I couldn't take the club any further, then it would be time for me to pass the baton."

After being demoted to Southern Football League Division One Midlands, Boro then went on to win promotion three times in four seasons to return to the pinnacle of English non-league football.

Last season they struggled, ultimately avoiding relegation with a week of the season in hand.

After the threat of losing long-serving manager Kevin Wilkin to AFC Telford United, they then started this season well, topping the Conference Premier table briefly in October.

But they have levelled out since to currently stand ninth in the table. And, if the club are to have any realistic ambition of progressing further, Neale realises the need for far greater investment.

"I believe that to continue progressing, and certainly to reach League Two, the club needs to make the transition from part time to full time and to continue upgrading Liberty Way to a standard which meets the club's aspirations," said Neale.

"And, for that, it needs some serious investment."