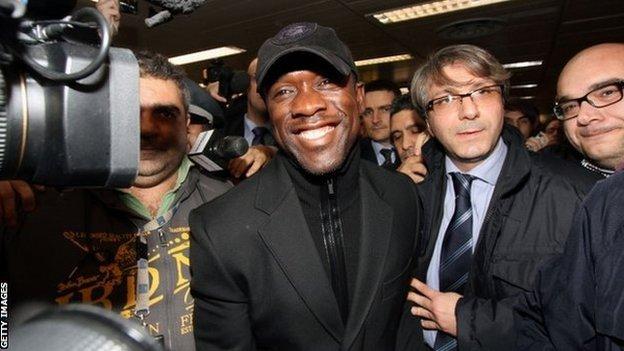 Clarence Seedorf has been appointed the new manager of AC Milan.

The 37-year-old Dutchman, who played for the Serie A giants from 2002 until 2012, has replaced Massimiliano Allegri, who was sacked on Monday after a poor start to the season.

Seedorf had been playing for Botafogo in Brazil but announced on Tuesday he was ending his 22-year playing career to take up the role at his former club.

"You can't say that I'm back as I never really left," he said.

"We have a lot to do to get the club back where it belongs and I'm very happy to be back here.

"At the moment, I feel very emotional and I also feel a sense of duty. I have to give 100% to rebuild, and to give enthusiasm and a sense of security. We can look to do important things for the fans. I left Milan in May 2012 at the end of a cycle. My job now is to open a new one."

Milan are currently 11th in the Italian top flight, and 30 points behind leaders Juventus.

He was also the first player to win the Champions League with three different clubs - Dutch side Ajax in 1995, Spanish giants Real Madrid in 1998 and Milan, in 2003 and 2007.

He has also played for Inter Milan and Sampdoria.