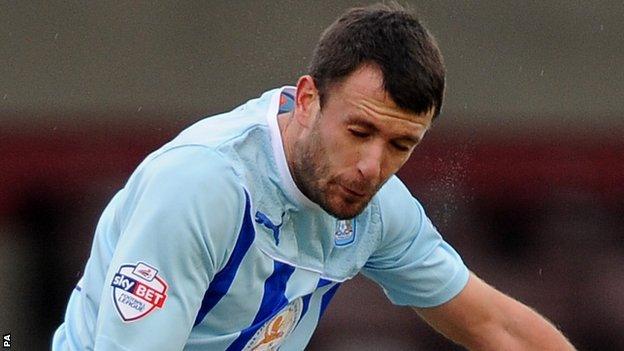 Coventry City have signed central defender Dan Seaborne from Yeovil Town on an 18-month deal on a free transfer.

The 26-year-old's contract means he will be with the Sky Blues until the summer of 2015.

Devon-born Seaborne, 26, has only once been on the losing side in seven games since first arriving from Yeovil, initially on loan, in late November.

"We had to fend off interest from other clubs to get him here," said Sky Blues manager Steven Pressley.

"I'm extremely pleased that we've managed to get Dan over the line, because he made quite a impression on us during his short loan spell and he definitely brings strength and physicality to our back line.

"I'm looking forward to picking up where we left off with him before the new year."

Seaborne's loan ended prematurely after he was suspended for three matches by the Football Association disciplinary panel, punished retrospectively for a first-half incident with Oldham striker Jonson Clarke-Harris in the 1-1 draw at Sixfields over Christmas.

But he has now served his suspension and is free to play for Coventry in Saturday's trip to Preston.

He is also eligible for the following Friday night's FA Cup fourth-round trip to the Emirates Stadium to play Arsenal.

He played in both matches in the second round as the Sky Blues needed a replay to beat Hartlepool.