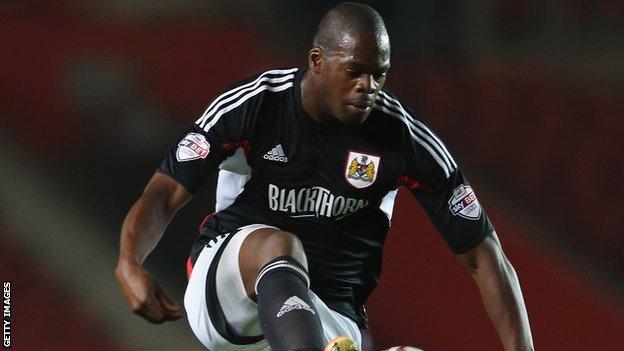 In 1996, a teenage Harewood was turning professional at a time when centre-back Cooper was a mainstay in Forest's side.

The 34-year-old on Monday having left Bristol City earlier in the January transfer window.

Harewood made his professional debut in 1998 with Cooper in the same Forest XI. Since then, he has played for FC Haka, Ipswich, West Ham, Aston Villa, Wolves, Newcastle, Blackpool, Guangzhou, Barnsley and Bristol City.

"Then, I was in awe of senior players like Stuart Pearce and Colin so it's funny how football works out," he said.

"Now I'm that senior player and Colin thinks I can help develop what is a young squad of players here."

Last season, he was playing in the Championship for Barnsley, before in which he only started two matches.

Now Harewood will experience England's fourth-tier for the first time.

"I have to start doing my homework on the teams in this division now because if I'm honest I don't know a lot about it," he told BBC Look North.

"But I trust Colin and he has given me a bit of a lowdown so I'm excited to get going."