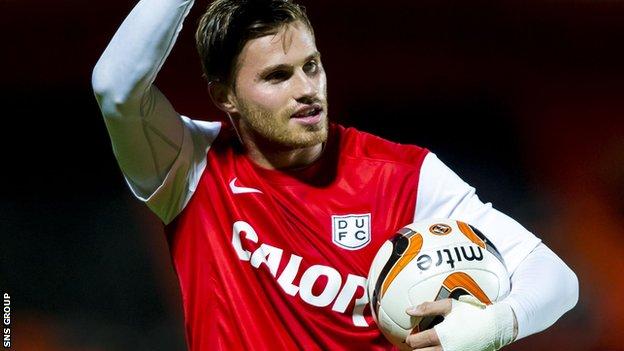 Aberdeen manager Derek McInnes admires David Goodwillie but stresses he would not match what Dundee United paid to take him on loan from Blackburn.

The 24-year-old striker is back at Ewood Park, having scored six goals in 22 appearances at Tannadice.

"He's a player I am well aware of - I played with him and I think he has got the quality to score goals," McInnes told the club website.

"But any player coming in here would need to be on a deal that suits us."

A £2m transfer took Goodwillie to Blackburn from Dundee United in August 2011.

But the Scotland international made his way back to his first club on a temporary basis this summer, with United covering a percentage of his wages.

Goodwillie's representative, Ricky Gillies, says the striker wants to fight for a first-team place with Blackburn, but it is believed that Aberdeen are his preferred option if he is to go back out on loan.

Gillies also credits St Johnstone and Oldham with an interest in the player.

"We have been strongly linked with him," added McInnes. "Like everything else, sometimes you can speak to an agent and before you know it you have got a serious interest there.

"It (any deal for Goodwillie) certainly wouldn't be on figures that I think he was getting paid previously for his loan spell this season.

"We are happy to an extent with the squad but you are always looking to improve it.

"Whether it's him or someone else coming, if I felt there was a player there who could improve us, or help us be successful this season, then I would ask the question."