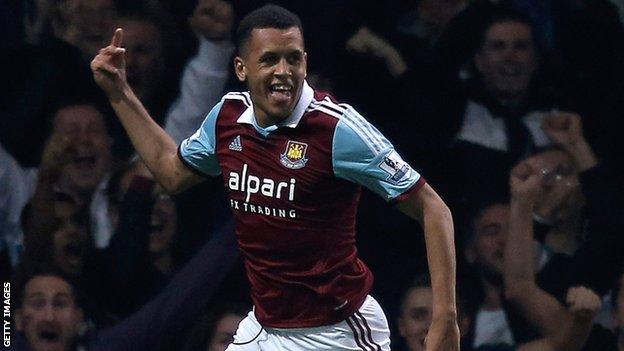 Ravel Morrison has insisted he is fully committed to West Ham despite claims that he wants to move to Fulham.

West Ham complained to the Premier League after Fulham manager Rene Meulensteen said midfielder Morrison wanted to sign for them.

The 20-year-old has responded to the "frustrating" reports.

"I always try to keep my focus on the next game and show people with my performances that I want to do well for West Ham United," he said.

Morrison, who has 18 months left on his contract, worked with Meulensteen when the Dutchman was a coach at Manchester United.

It had also been suggested that he had threatened to go on strike but West Ham denied those claims, insisting the player has trained this week following his recent groin injury.

Morrison told West Ham's website: "I've been working really hard over the past few weeks to get back to full fitness after missing a couple of recent games with a groin injury.

"I'm feeling fine now and I'm hoping to be involved in Saturday's important game with Newcastle and then the Capital One Cup semi-final with Manchester City on Tuesday."

West Ham are unhappy after Meulensteen said: "Yes, I think he does want to come [to Craven Cottage]."

The Premier League has not confirmed receipt of any official complaint.

After watching Fulham beat Norwich 3-0 in their FA Cup third-round replay on Tuesday, Meulensteen - who took over from sacked compatriot Martin Jol in December - confirmed his interest in signing England Under-21 international Morrison.

"We have put in a bid that has been knocked back," he said. "He would add pace, power, unpredictability and a real attacking threat."

Meulensteen said it was too early to tell whether any deal can be struck before the transfer window closes at the end of January.

"We got knocked back, it got rejected, and so we need to review it and move on," he said.

"I've explained how I think about the situation [to the Fulham board], so we'll have to wait and see what happens."

Meulensteen said in his press conference on Thursday that he would not speak further about potential targets.

"I am not going to make any comments on (transfers) because it is going to get me into trouble," he added.

"It is wiser at this moment in time that we are not going to comment on anything that is happening in regards to any transfer news or speculation.

"Things are in hand with the club, with (chief executive) Alistair Mackintosh."

West Ham's complaint is likely to surround Premier League ruling T.8 concerning "statements made publicly by or on behalf of a club expressing interest in acquiring the registration of a contract player".

If the Premier League deems Fulham to be in breach of the rules, the club could face a reprimand or fine.

It is also possible the case could be referred to the Football Association.

Morrison has scored five times in 20 appearances since moving to Upton Park from Old Trafford in January 2012.