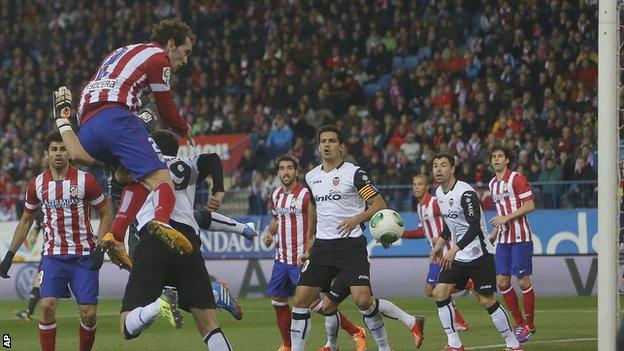 La Liga title hopefuls Atletico Madrid clinched a place in the Copa del Rey quarter-finals with a 2-0 home win in their second leg against Valencia.

Valencia's Daniel Parejo was dismissed for a second yellow card in added time.

The victory against Valencia means Atletico are still in the hunt for silverware in three competitions.

Diego Simeone's men are second in La Liga after Sunday's goalless draw against leaders Barcelona, which left the pair still separated by goal difference, while their Champions League campaign resumes next month against AC Milan.

"This is a demanding level and we know we can't afford to make mistakes. We are all working hard and we have a big enough squad to cope," said goalscorer Garcia.

Real Madrid, who lost to Atletico in last year's final, face Osasuna on Wednesday, holding a 2-0 advantage from the first leg.

On Thursday, Barcelona are expected to reach the last eight when they visit Getafe on the back of last week's 4-0 win at the Nou Camp.