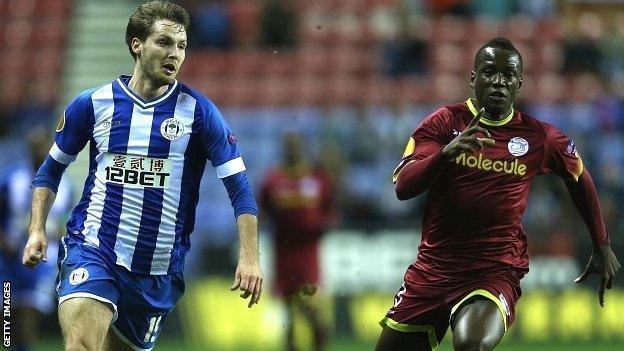 Wigan boss Uwe Rosler says forward Nick Powell cannot be expected to play every game for his side this season.

The teenager, on loan from Manchester United, scored twice as a substitute to help the Latics beat MK Dons 3-1 in the FA Cup on Tuesday.

"Don't forgot, Nick is 19 years old and has played a lot of football already," said Rosler.

"I have to be very careful and make sure we don't burn him out."

Powell joined Wigan in a season-long loan in September and took his tally to 10 in 26 appearances for the Championship side against the Dons, scoring the equaliser to take it to extra time before putting his team 2-1 in front.

The England Under-21 international played just six games for United last season, his first campaign with the Old Trafford side after making a multi-million pound move from Crewe.

"Nick is getting an enormous amount of experience in the Championship in a team that will now fight for the play-offs," added Rosler.

"He didn't start today but came on and looked very fresh and gave us what we needed.

"I feel after this season Manchester United will get a player back with more experience. That can only be good for everybody involved.

"What excites me about Nick is he can play everywhere. He came on as a midfielder, then I put him up front and in many games I play him in a wide position coming inside and I can play him as a number nine because he has a tremendous physique."

Rosler, whose side are 10th in the Championship, said that United boss David Moyes keeps tabs on the youngster and will expect an update on his progress later this month.

"We speak regularly. David Moyes knows me very well. He knows his players will be well looked after," said the German.

"We agreed we'll have another talk in the last week of January. The player is happy, David is happy and I'm very happy. So I hope it continues."

Meanwhile, Rosler confirmed that Cardiff striker Nicky Maynard was having a medical on Wednesday morning ahead of a proposed loan until the end of the season.