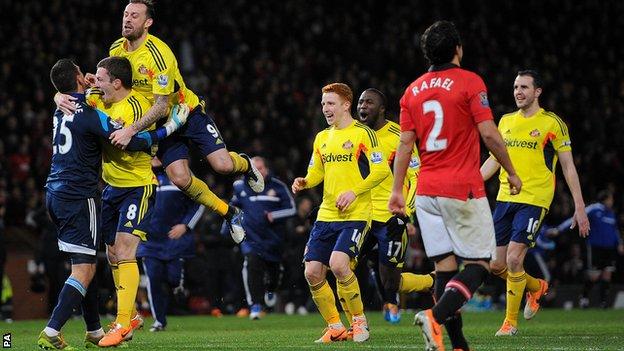 The Black Cats could not hold out and Javier Hernandez's goal seconds from the end spared De Gea but subjected Old Trafford to the drama of spot-kicks that almost descended into farce.

In a blizzard of wild misses and fine saves, only three of the 10 spot-kicks were scored.

Danny Welbeck and Phil Jones were off target for United while Sunderland's heroic goalkeeper Vito Mannone denied Adnan Januzaj and, crucially, Rafael, the stop that sent Gus Poyet's side to the final on 2 March.

Darren Fletcher was the only United player to score and Moyes once again cut a dejected figure as he walked off defeated at the end.

Before they could celebrate, Sunderland's magnificent 9,000-strong support suffered agonies of their own, with Craig Gardner and Steven Fletcher missing while Marcos Alonso and Ki Sung-Yueng scored before De Gea saved from Adam Johnson when he had the chance to seal the win.

Mannone had the final say against Rafael, sparking scenes of wild celebration among Sunderland's players and fans.

It was a triumph they deserved as their belief never wavered, even deep into injury-time, and a Wembley final will surely act as a tonic in their attempt to stay in the Premier League.

Before kick-off, Old Trafford was buzzing with the news of Juan Mata's imminent arrival from Chelsea - and a largely abject performance from Moyes's team was the perfect illustration of why United are prepared to break the club record transfer fee to land the Spaniard.

And now, barring the extremely unlikely event of this fading United side winning the Champions League, Moyes will end his first season in charge without a trophy.

United were again without injured Wayne Rooney and Robin van Persie but they opened at a high tempo in an attempt to swiftly wipe out Sunderland's lead from the first game and Mannone was called into action to block Hernandez's header as he stole in on Januzaj's free-kick at the far post.

Sunderland , however, were solid and well-organised enough to give United an anxious moment in the 18th minute when Fabio Borini latched on to Johnson's fine pass and sent a spectacular volley inches over the bar.

The mood inside Old Trafford was one of growing frustration but this was eased when they finally broke through eight minutes before the break.

Sunderland had survived a scramble after Darren Fletcher headed Shinji Kagawa's cross against the post and Mannone blocked Welbeck's follow up - but they did not escape for long.

The Black Cats appeared to have justified appeals that a corner should not have been awarded and their pain increased when Evans escaped John O'Shea's attentions to turn in Welbeck's flick. Borini briefly appealed for offside but he was, in fact, the man playing Evans onside.

Johnson thought he had a chance to win it with 15 minutes remaining but his goal-bound shot, which would have given the Black Cats a 3-2 aggregate lead, was blocked by Alexander Buttner.

Sunderland were sensing the opportunity and Marcos Alonso gave De Gea a worrying moment with a powerful angled drive that flashed just wide of the far post.

For all of Sunderland's effort, United had a big chance with the last kick of injury time after John O'Shea upended Hernandez, but Mannone dived high to his left to save Januzaj's free-kick.

This was a game of great endeavour but few clear chances and Hernandez wasted one of the few obvious opportunities by shooting wide from the edge of the area after an excellent chase and pass from Januzaj in extra-time.

Then came the drama of those final moments, when De Gea's horror moment looked to have put Sunderland through to Wembley as he completely misjudged Bardsley's tame shot and let it slip through his fingers.

Sunderland had two minutes to survive but it was beyond them. Januzaj at last picked the right pass for Hernandez to set up penalty kicks and The Black Cats' first Wembley final since 1992.