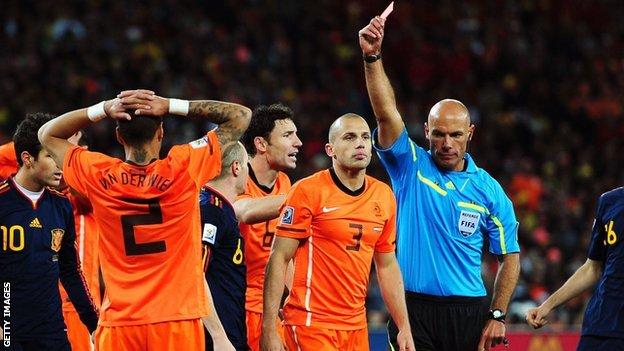 Premier League referee Howard Webb has been selected on the Fifa list for this summer's World Cup in Brazil.

Webb, 42, was in charge of the 2010 World Cup final in South Africa and sent off Netherlands defender Johnny Heitinga in Spain's 1-0 win.

He also booked a further 12 players in the match in Johannesburg.

Michael Mullarkey and Darren Cann will again be Webb's assistants in the summer after performing similar roles in South Africa.

Webb has been a Premier League referee since 2003.

In 2010, having been appointed for Inter Milan's 2-0 win over Bayern Munich, he became the first referee to officiate a Champions League final and a World Cup final in the same year.