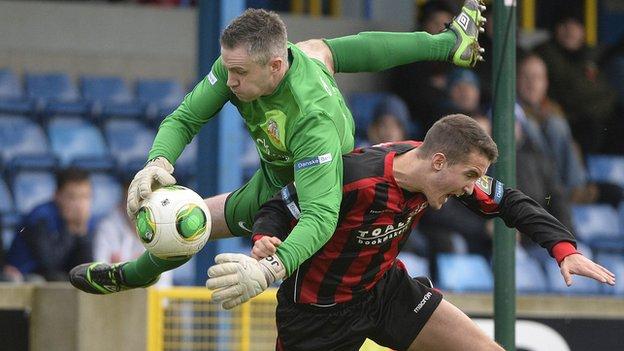 Glenavon keeper John Connolly faces a lengthy spell on the sidelines after suffering a broken leg in a reserves game on Tuesday night.

The former Cliftonville player sustained the injury in the 3-0 defeat by Glentoran Reserves at the Oval.

The injury leaves Glenavon without a recognised goalkeeper for Saturday's Premiership game at Ballinamallard.

First team keeper Andy Coleman is banned after being sent-off in the Premiership game against the Glens.

Coleman received a red card in the 3-2 defeat at Mourneview Park after handling outside the area to deny Jordan Stewart as the young Glens player attempted to score with a chip.

Glenavon had no keeper on the bench and midfielder Brian McCaul went into nets with Glentoran leading 1-0.

Connolly joined the Lurgan Blues last summer after an eight-year spell at Solitude.