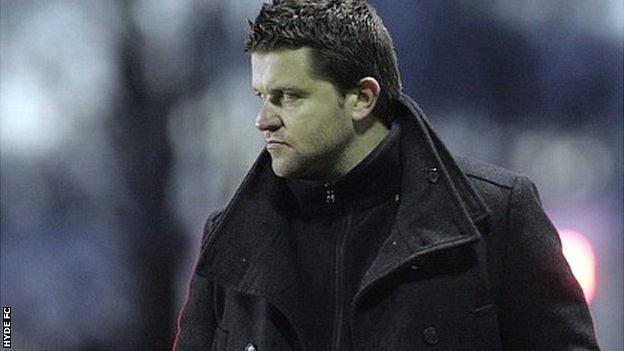 Hyde manager Scott McNiven has praised the resolve of his players after they ended a 29-match winless run in the Conference Premier by beating Welling.

"It feels great," McNiven, 35, told BBC Radio Manchester. "It's nice that the players have got a reward for all the hard work they've put in this season."

When I've been coming in for the last six months, she's been hiding under the sofa. Last night, she came and gave me a kiss

They seemed almost certain to pass the mark set by the Shropshire outfit last season, having drawn four and lost 23 of their 27 league games in 2013-14.

But goals from Louis Almond and Connor Hughes sealed a first victory in nine months - their last was a 1-0 home win over Ebbsfleet.

Hyde remain bottom of the table and 19 points from safety with 18 matches to play.

McNiven did not allow himself to believe the game was won until the final whistle blew "because we've had some close calls this year" and there had been games where Hyde had "come off scratching our heads thinking 'how have we lost that?'"

He added: "We've scored in the last minute and then the other team have gone up the other end and scored. You can never say never with us, unfortunately.

"But the changing room is always good and the training has always been good. Obviously confidence has taken a hit, as you would expect with any bad run.

"My dog can usually read my body language. When I've been coming in for the last six months, she's been hiding under the sofa. Last night, she came and gave me a kiss."

Hyde face Forest Green on Saturday, where they will be looking to avenge an 8-0 hammering on the opening day of the season.

"I'm just delighted about last night and I'm not really thinking about Saturday yet," said McNiven, in his second season as manager at Ewen Fields.

"If the lads can show the same performances that they have in the last two games, we can try to get as many points as we can between now and the end of the season."