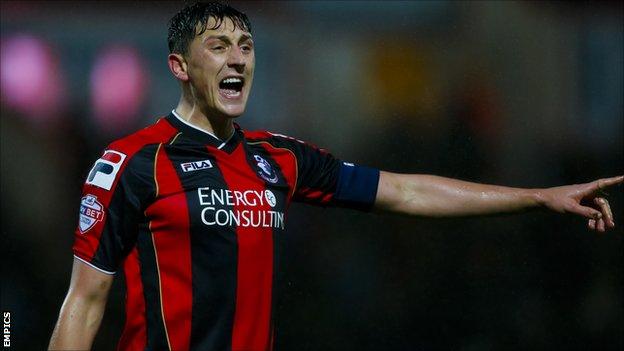 Bournemouth captain Tommy Elphick says he will not be daunted when he comes up against his "heroes" Liverpool in the FA Cup fourth round on 25 January.

The Cherries sealed a glamour tie against Brendan Rodgers's side - the team Elphick supported as a youngster - by defeating Burton 4-1 on Tuesday.

"You usually get disappointed when you meet your heroes but I'm sure it will be good," Elphick, who also scored against the Brewers, said.

"I don't think it will be daunting."

Central defender Elphick, whose boyhood hero was Liverpool legend Jamie Carragher, knows he could be in for a busy afternoon when Luis Suarez and Daniel Sturridge come to Dean Court.

However, the former Brighton player says he and his team mates are experienced enough to deal with the challenge and added the visit of Spanish giants Real Madrid in pre-season will stand them in good stead.

"We've had that tie against Real Madrid, most of us are experienced and have played against big players and with big players now," he told BBC Radio Solent.

"Don't get me wrong it's Liverpool versus Bournemouth and we will be looking to win the game.

"It will be a great atmosphere and a sell out and it feels like we're playing Champions League football this season.

"Any game at home we will look to win, but they are a very good side and one of the best sides to watch at the moment.

"Their philosophy and the way they play the game is remarkable and should be admired. This is the strongest Liverpool side there has been for a while so to play against them will be a great occasion."

For me, the Watford game is the biggest of our season because it is the next one

Manager Eddie Howe, admitted the tie against the five-time European champions would be a special day in the club's history, but added his immediate concern was on facing Watford in the Championship this weekend.

"For me, the Watford game is the biggest of our season because it is the next one," Howe told BBC South Today.

"All eyes and attention now goes to that game. We have got to prepare well and try to get back to winning ways at home.

"The league is our priority this season. We want to do well in the FA Cup and the Liverpool one is a game ahead in the calendar that we can look forward to and enjoy, but up until that point we have to do our work in the league.

"We have got a very level-headed group of players who know they have to work hard to get success that they deserve. The Liverpool game is a nice one but it is not what we train to do every day."