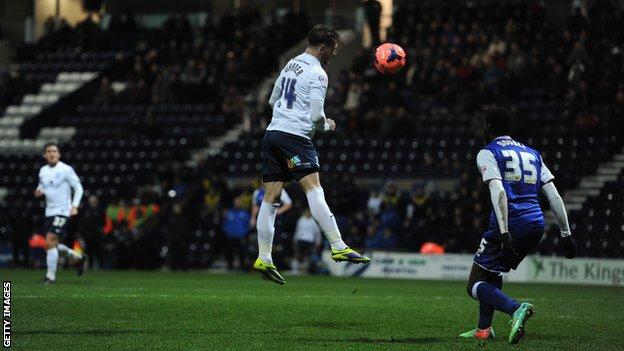 Garner came off the bench to score three second-half goals as the League One outfit came from behind to win 3-2.

"Joe has had a good season so far and deserves it. You could see the tempo increase when he came onto the pitch," Grayson told BBC Radio Lancashire.

"It wasn't a gamble because he is the club's leading goalscorer."

The Lilywhites went behind at Deepdale when Frank Nouble struck the opener, but Garner's introduction just after the hour mark turned the game around.

The 25-year-old striker has scored 13 goals in all competitions this season, but Grayson reserved special praise for veteran striker Kevin Davies, who joined the club on a free transfer during the summer.

"You make these decisions trying to get back into the game," he said. "Kevin has made a living out of the game because of the strengths he plays to.

"Anytime Kevin Davies is on the pitch, the centre-halves know they have been in a game.

"Sometimes he doesn't get the decisions he deserves because he is the big target man and knocks them about a little bit."

Garner, who became the first Preston player in history to score a hat-trick as a substitute, will face his old club Nottingham Forest in round four.

The former Carlisle man added: "I always feel like I can nick a goal, and to get three was very nice. The FA Cup match balls are pink, so I imagine my little girl will want that."

Meanwhile, Grayson believes 20-year-old midfielder Jeffrey Monakana, who was signed by previous manager Graham Westley and to join Brighton, did not live up to his potential.

"He has been out on loan, he had opportunities last year and people can look at his huge potential - he has shown glimpses of what he is capable of.

"If he manages to get his head in the right place, he can be a footballer."