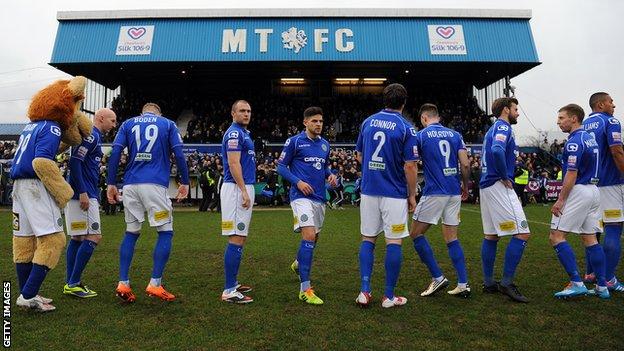 Macclesfield boss John Askey hopes his side's FA Cup run can boost interest in the club from the local community.

The Silkmen played four ties to reach the third round, going out after defeat by Sheffield Wednesday in a replay.

"The FA Cup has been our saviour this year. We now need to build on the impetus it has created," Askey told BBC Radio Manchester.

"If we can carry on winning then we can obviously get more support and interest from local businesses."

The 4-1 loss against Championship side Wednesday brought an end to Macclesfield's cup campaign having beaten Vauxhall Motors, Swindon and Brackley Town in previous rounds.

Having earned £57,500 in prize money, plus gate receipts, the Conference Premier side have benefitted financially.

"The FA Cup has created a lot of interest in the town and for the football club and we need to try and keep that going now," said Askey.

"As a team, the players have to build on it. If we can compete with Sheffield Wednesday, there is no reason why we can't go on and beat teams in our league."

A run of only three defeats in their last 12 games has allowed the side to climb up to 12th in the league - and Askey feels they can push on further.

"We had a terrible start to the season," he added. "If we can win our next few games then we have a good chance of getting in the play-offs.

"Management has been really hard and there have been some sleepless nights but it has all been worth it because we can see a little bit of light at the end of the tunnel."