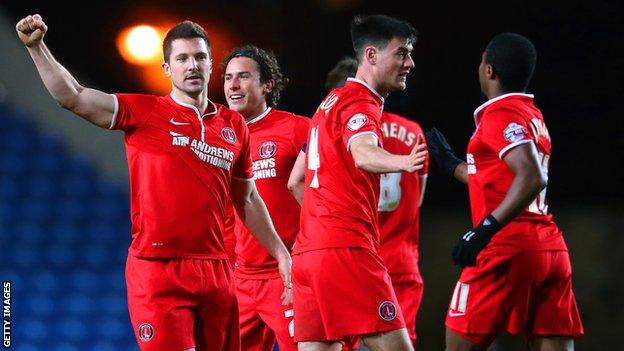 The French striker, whose goal earned the Addicks a 2-2 draw in the first game after they had been two down, hit a first-half opener with a fine drive.

An all-Championship fourth-round tie at Huddersfield was secured when Kermorgant struck a 25-yard free-kick.

Chris Powell's side had looked on course for an early exit from the competition a week ago when John Mullins and Scott Davies had put the U's ahead in a match which had been postponed twice because of a waterlogged pitch.

But having helped to force a replay, Kermorgant struck at the Kassam Stadium with a sweet left-footed shot from 20 yards after collecting a Simon Church lay off 10 minutes before the break.

Church was involved again when the hosts soon doubled their lead, as he squared for Green to tap in from three yards.

Charlton ensured victory after the break when Kermorgant grabbed his second with a rasping free-kick.

The reward for their first win of 2014 is a meeting with Huddersfield at John Smith's Stadium on Saturday.

"Considering what we went through in the first game, I was very pleased with how we did in this one.

"Even though we had had a long trip to Middlesbrough last Saturday I thought the players put in a sterling effort.

"The goals came at the right time and I thought we were quite clinical tonight. I'm pleased with all aspects of our play and for our fans as well."

"We started well enough for the first 25 minutes and stayed competitive but gave two bad goals away. For the first, one of our players didn't track, and the second one was a mistake.

"We tried to get back into the game in the second half, but it was the same. We started off on the front foot and made more of a game of it, but then ran out of steam."