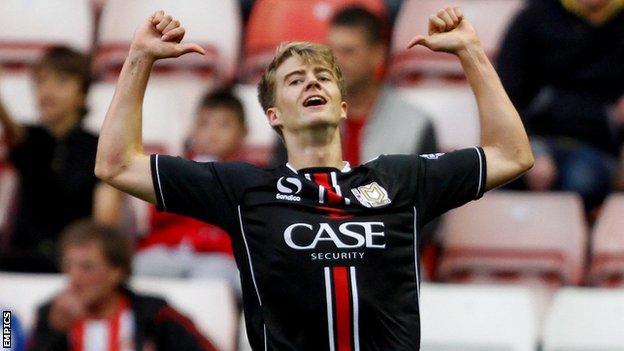 Derby first-team coach Paul Simpson says Patrick Bamford's versatility was a major factor in their decision to sign the Chelsea forward on loan.

The 20-year-old, who scored 17 goals while on loan at MK Dons, has signed until the end of the season.

Simpson told BBC Radio Derby: "He played a lot as the lone striker at MK.

"He can do that well because he has good ability, can hold the ball up and he has a willingness to get in behind. And he can can also do the wide role."

He continued: "That's why we brought him in, because we think he is a good addition to the squad and he ticks a lot of boxes for us."

The Rams are in fourth spot in the Championship table, despite their 4-1 defeat by league leaders Leicester last Friday.

Simpson said Derby's success means Bamford, who came on a substitute in that loss, must stay patient as he looks to win a place in the starting line-up.

"The problem we have got is choosing the right time to put him in," he added.

"What we have to do is integrate him at the right time and it is up to the manager to decide when it's the right time to put him in and hopefully he will then be able to carry on where he left off at MK Dons.

"He has settled in really and seems a good lad. He knows a few of the boys anyway from the [England] Under-21s and being involved across the way in Nottingham. He's not come into it blind, not knowing anybody.

"He has fantastic technique and you can see he is a good footballer and that he has the potential to be an even better footballer."