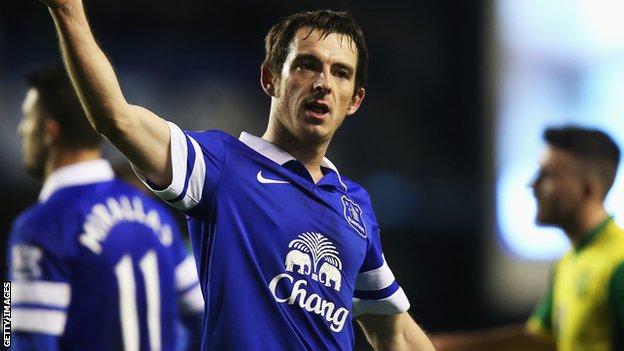 Leighton Baines is close to agreeing a new long-term deal to stay at Everton.

Former Toffees manager David Moyes twice failed in his efforts to take the 29-year-old England left-back with him to Manchester United last summer.

Everton are now increasingly confident they will shortly be able to confirm Baines, who signed for £6m from Wigan in August 2007, has committed the rest of his top-flight career to the club.

Everton are currently on a break in Tenerife and Baines, who has been capped 22 times by his country, could sign his new contract when they return.

After failing with two bids before the start of this season, including one which would have seen Baines move to Old Trafford along with midfielder Marouane Fellaini for a joint fee of £28m, Manchester United have once again been linked with the attacking full-back.

But it now looks like Moyes will have to pursue other targets, with Southampton's Luke Shaw and reportedly being on his radar.

Moyes' offer infuriated the Everton hierarchy, who dismissed it as although United eventually signed Fellaini for £27.5m.

Everton also want to persuade 20, into signing a new contract at Goodison Park.