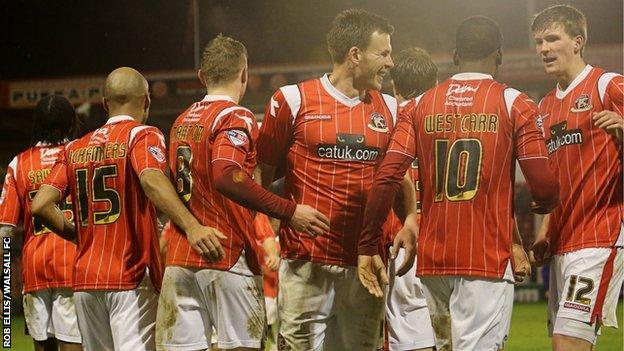 Walsall boss Dean Smith reveals that he consulted his senior players in the Saddlers dressing room before re-signing Febian Brandy on loan.

Brandy, booed by the Saddlers fans when he returned to the Bescot with Sheffield United on New Year's Day, has returned until the end of the season.

And Smith admitted: "I spoke to a number of players to see if they wanted him back and it was unanimous.

"We have a good dressing room. I didn't want to upset that," he told BBC WM.

"But Febian he's different. He gives us something we don't have.

"He got a lot of booing when he came back here on New Year's Day with Sheffield United, but only good players get booed.

"The fitter he gets the more opportunities he'll create for himself and others."

The 24-year-old's surprise return to play for the club he left in the summer came just days before another former Walsall favourite Will Grigg is due back at the Bescot with League One pacesetters Brentford on Saturday for the meeting of sixth against first.

"They don't come any tougher than Brentford on Saturday," admitted Smith.

"They're on a fantastic run of results, a bang-in-form team who seem to have the budget to go and bring in players from everywhere. And I'm really looking forward to it.

"We're in the play-off positions at the moment but it's what happens after 46 games that counts.

"We said after the Tranmere game that we'd see it as two points lost if we didn't win against Oldham in midweek.

"But, having won on Tuesday night, that looks a good point now."