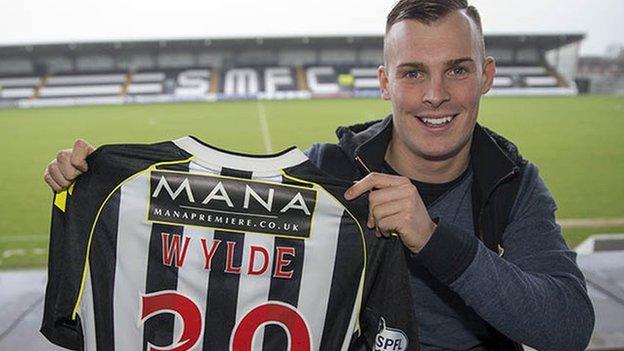 The 22-year-old has agreed a one-and-a-half-year contract after passing a medical with the Paisley club.

Wylde had fallen out of favour at Pittodrie, where he had

Aberdeen announced on their website: "Gregg Wylde has had his contract cancelled by the club."

Kirkintilloch-born Wylde was a product of the Rangers youth system and broke into the first-team in August 2009.

He went on to make 47 appearances for the Ibrox outfit, but in 2012 he agreed to terminate his contract after the Glasgow club went into administration.

Registration problems meant the Scotland Under-21 international was unable to help Bolton in their failed attempt to avoid relegation from the Premier league.

Despite Wylde failed to make a single appearance for Wanderers in the Championship and was then in League One, before being released last summer.

Dons boss Derek McInnes expressed confidence that he would make an impact with his "real pace and good balance" on his arrival at Pittodrie.

However, Wylde made only 10 appearances for Aberdeen, six from the substitutes' bench, and has not featured since 1 December.