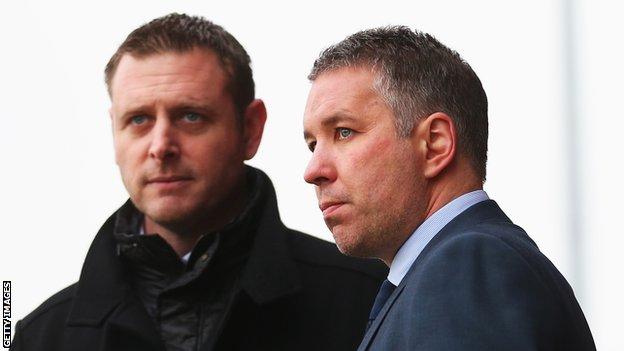 in the FA Cup on Tuesday and have been beaten in their last four league games.

"I will do my part and support them all by working hard in bringing some freshness to the squad," MacAnthony said on Twitter.

"And one hopes we see the hard work/perseverance pay off in the two home games we have coming up."

Fair play to the chairman for sticking by the gaffer.

He has shown what he is capable of and has a great record in the league.

I'm sure it will improve. They're going through a sticky spell. But it's important for the chairman to come out and back him.

Tranmere on Saturday will be looked at as a must win and I think they will get that win and kick on from there.

Peterborough's target was to win automatic promotion back to the Championship this season, following relegation on the final day of the last campaign.

And after winning 10 of their first 12 games in League One, they seemed to be well on course to do so.

However, nine defeats in the last 12 games have seen the London Road side plummet to seventh, 15 points adrift of the top two, and provoked calls from supporters for Ferguson to leave.

"The flak is non-stop from all angles and deservedly so considering these results," added MacAnthony, who rehired Ferguson as manager in January 2011, 14 months after the Scot ended his first spell at the helm and joined Preston.

"So what I can do is do my best to support a management team who have worked with my club for many years and brought it all its success in the period I have owned it.

"The players don't need me or you to tell them how poor it's been. They set their own standards and have fallen way below them as we all know.

"What I/we can do now is focus and support the staff/players in working hard to rediscover their form/confidence to get the season back up and running."