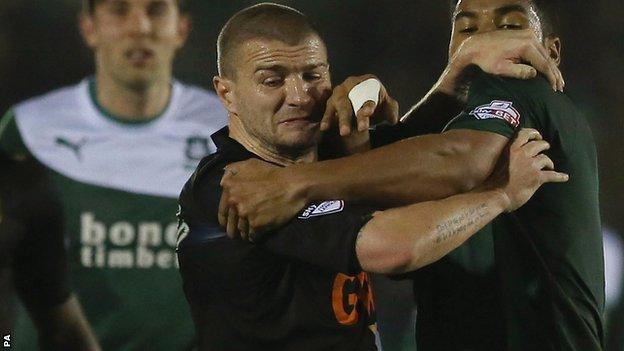 Port Vale defender Carl Dickinson has been praised for playing in Tuesday's FA Cup replay win at Plymouth in the wake of his mother's death.

"For the lad to do what he's done shows what a great lad he really is," Vale assistant manager Mark Grew told BBC Radio Stoke. "It's a privilege to have him in our team.

"A lot of people would have swayed away. But what a great character.

"Anyone who has lost a parent will know just how he is feeling."

Grew continued: "He lost his father a couple of years ago, so it's been a very hard time for him.

"I don't know how he's feeling inside. But he's gone out and done a great job."

Former Stoke City player Dickinson, 26, who is one booking away from a second suspension of the season, has missed just three matches since signing from Watford on a one-year contract last summer.

Vale's 3-2 win at Home Park earned them a fourth-round tie against Brighton on Saturday 25 January.