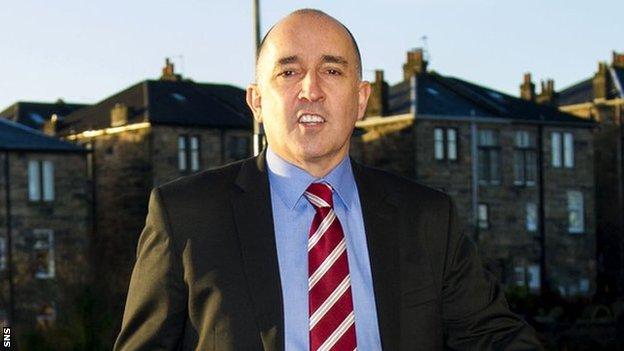 Managing director David Southern and director of football John Murray have agreed to voluntary wage cuts in a bid to help reduce costs at Hearts.

The move is part of the same process that led to by the club presently in administration.

Administrator Bryan Jackson thanked the pair for their "kind" gesture.

He explained that the cuts were necessary to keep Hearts solvent until they can come out of administration.

But the Edinburgh outfit's exit from administration has been delayed until parent company UBIG's 50% shareholding is either sold or assigned.

That will not happen until

"We remain focused on the main issue of getting Hearts out of administration by negotiating with the Lithuanian administrators for the transfer of shares," said Jackson.

"However, a key element in the success of this administration is keeping Hearts solvent throughout this process until the share transfer can occur and all issues can be resolved.

"I would like to thank the team and staff at Hearts and the fans for their patience and loyalty throughout a very difficult period.

"We are getting closer to a resolution, but there is still some way to go and several obstacles to overcome.

"So I would ask everyone to remain focused on the end result, which is to keep the club going both on and off the pitch for the next few months."