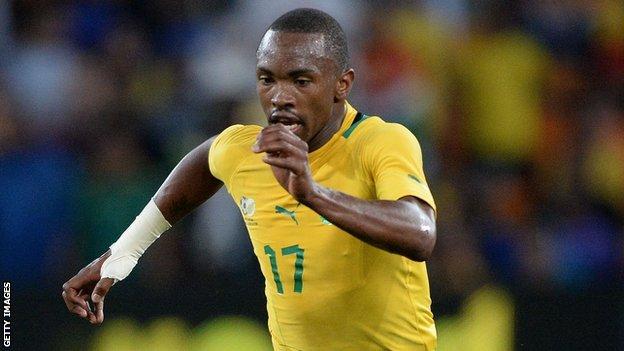 Hosts South Africa drew 1-1 with Mali in their second Group A game at the African Nations Championship.

Bernard Parker gave South Africa the lead with a controversial penalty in the 23rd minute in Cape Town.

Mali's equalizer came nine minutes after half-time when Ibourahima Sidibe finished well from inside the area.

In the day's other game, Rabiu Ali scored twice as Nigeria beat Mozambique 4-2 to knock them out of the tournament.

South Africa took the lead from the spot after Souleymane Konate was adjudged to have fouled Lindokuhle Mbatha inside the area. Replays showed that the incident happened outside.

The Malians were aggrieved when they had their own claim for penalty turned down after keeper Itumeleng Khune brought down Abdoulaye Sissoko after just nine minutes.

After Sidibe's equaliser, both sides had chances to win the game in the second period with Lassana Diarra and Adama Traore threatening for Mali while Parker came closest for the hosts.

The result means that both sides move to four points in Group A having won their opening matches.

In the day's later game, Nigeria and Mozambique both needed a win to stay in the competition, and it was Mozambique who took the lead in the 10th minute when Dario Khan smashed a long-range free-kick into the top corner.

Ifeanyi Ede tapped home after a a long throw-in to equalise before Ali put them ahead from close range.

Mozambique made it 2-2 when Diogo slid home after some poor goalkeeping from Chigozie Agbim, but Ali scored his second to put Nigeria ahead.

The Super Eagles put the game to bed with two minutes left when Barnabas Imenger lifted the ball into the net soon after being brought on as a substitute.