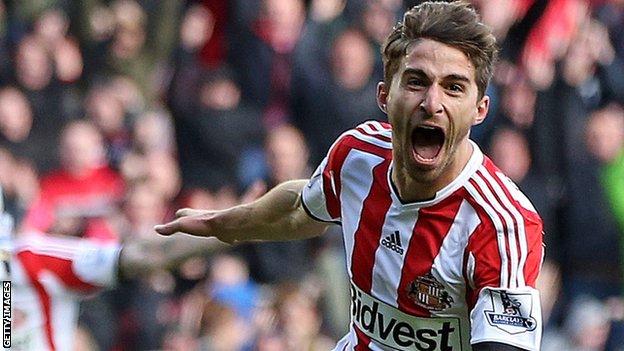 Sunderland's Fabio Borini says despite predominantly being used out wide, he considers himself a centre-forward.

The 22-year-old has made 19 appearances for the Black Cats after although nine of those have come from the bench.

Italy forward Fabio Borini has scored just one league goal for Sunderland - the winner in October's Wear-Tyne derby at the Stadium of Light.

"Lately, I look like a utility player but personally, my role is to play in the centre, nearer the goal," Borini told BBC Newcastle.

"But it is the manager's choice to use me on the wing."

He added: "I'll keep trying to improve every game, even if I think it's not my position."

Then a striker, Borini having scored nine Serie A goals for Roma the previous season.

He has started Sunderland's last six matches after scoring a late equaliser having come on as a substitute in the the game before.

During the Italy forward was taken to hospital after being taken ill at half-time.

He had been unwell prior to the game, but decided to play anyway.

"In that game, I had more chances to score than in any other time this season," Borini explained.

"Because I was sick beforehand, I was not running up and down the pitch as much as I would usually like to.

"So I was closer to the Cardiff area, meaning I could get more shots on goal. Unluckily for me their goalkeeper [David Marshall] was superb."