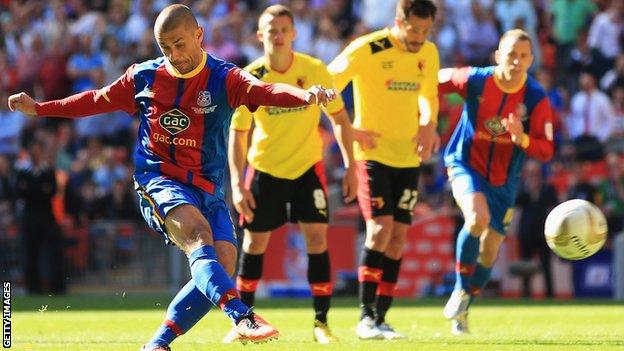 Leicester City have signed former Crystal Palace striker Kevin Phillips on a contract to the end of the season.

He agreed a one-year contract with Palace last summer, but was recently released by mutual consent.

"The opportunity to sign a player of Kevin's experience and knowhow doesn't come along too often," manager Nigel Pearson told the club website.

"He's a player I know well, he's a fantastic professional with multiple promotions to his name and he will bring some great qualities to the group, both on and off the pitch."

Phillips, who had also been strongly linked with League One side Wolves, has made more than 650 appearances during a career which started at Watford 20 years ago.

He has since played for Sunderland, Southampton, Aston Villa, West Bromwich Albion, Birmingham City and Blackpool.

Phillips joins Leicester with the club currently four points clear at the top of the Championship table and looking to return to the Premier League for the first time since 2004.

The former England forward, who won eight caps, has plenty of recent experience of the battle for promotion to the top flight.

He spent the second half of last season on loan with Palace and scored the winner at Wembley as the London club beat Watford in the Championship play-off final, 12 months after being part of the Blackpool side beaten by West Ham.

Phillips' most prolific spell came with Sunderland, for whom he scored 116 goals in 211 league games, and in 2000 became the only English player to win Europe's Golden Shoe award after scoring 30 goals in his first Premier League season.

A £3.25m transfer to Southampton followed in 2003 and he cost another seven-figure sum when he moved to Aston Villa two years later.

But it was not until he moved across the city to Albion in the summer of 2006 that he rediscovered his prolific form, netting 46 times in 82 appearances for the Baggies.

Since leaving The Hawthorns, he has often been used as an impact player from the bench, the role he filled when scoring the winning penalty at Wembley eight months ago which fired Palace back in the Premier League.