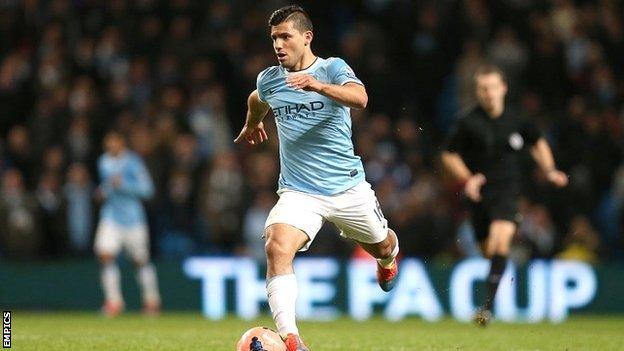 Manchester City boss Manuel Pellegrini stressed the importance of Sergio Aguero after the striker scored on his return from a calf injury to help beat Blackburn in their FA Cup replay.

The Argentine, 25, has been out since 14 December but came off the bench to score as City won 5-0 to book a fourth-round tie at home to Watford.

Pellegrini said: "It's important that Sergio came back and scored, which he did with his first touch.

"We have so many games at this stage."

The Chilean added: "Also to play 25 minutes will be important for him because he is fit after injury but he must be working on his fitness again."

City face a crucial three weeks in the Premier League and domestic cup competitions as Pellegrini pursues a quadruple in his first season in England.

After hosting struggling Cardiff in the league on Saturday, they face West Ham in the second leg of their Capital One Cup semi-final, albeit with a 6-0 lead from the first leg.

Following Watford's visit in the FA Cup, Pellegrini's side travel to sixth-placed Tottenham in the Premier League before hosting title contenders Chelsea on 3 February, with Jose Mourinho's side currently a point behind them in the league table.

City return to European competition on 18 February when they host Barcelona in the first leg of their Champions League last-16 tie.

Their latest rout saw them chalk up their 99th goal in all competitions this season, with Alvaro Negredo and Edin Dzeko both scoring twice against Championship side Blackburn.

I want to thank City's fans for the warm welcome. And also all of the physicians and therapists of Manchester City that helped me recover.

Negredo, who signed from Sevilla in the summer for £20m, is the club's top scorer this season on 21 goals, with Aguero on 20 and Dzeko 15.

Pellegrini said he wanted his side to continue in the same vein as they look set to break goalscoring records this term.

"It's an important amount of goals," he said.

"When I arrived here, it was important to try and win a trophy, but it's important for the fans to come here and know that we are going to try and score the most amount of goals we can."

Pellegrini added that City were experiencing a "good moment" but pointed out there were was still a long to go in the campaign.

"How we end it is very important," he said. "The best way to do it is to try to play every game like a final."