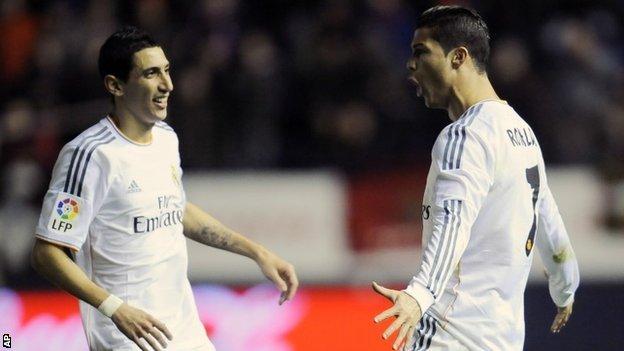 Cristiano Ronaldo celebrated his World Player of the Year award with a goal as Real Madrid beat Osasuna 2-0 - and 4-0 on aggregate - in the Copa del Rey.

The 28-year-old, who won his second Ballon d'Or on Monday, was fortunate to see his free-kick slip through goalkeeper Andres Fernandez's grasp.

Angel di Maria doubled the lead with a low finish before Gareth Bale replaced Ronaldo in the 68th minute.

Bale, without a goal since November, did little to win back his place.

He may find a space in the side through Fabio Coentrao's suspension after the left-back - rumoured to be a January target for Manchester United - was sent off for a second booking late on.

Bale's demotion to the bench was one of six changes Carlo Ancelotti made to the team that beat Espanyol at the weekend.

Osasuna had held Real and La Liga champions Barcelona to draws at El Sadar in the league this season, but never looked likely to recover from a 2-0 defeat in the first leg at the Bernabeu.

Real face a quarter-final clash with Espanyol, who scored two goals in the final 10 minutes to overcome second division side Alcorcon 4-2 on the night and 4-3 on aggregate.

Athletic Bilbao set up a meeting with holders Atletico Madrid in the last eight with a 2-1 aggregate win over Real Betis.

Barcelona play Levante in the last eight, providing the Catalans convert a 4-0 first-leg advantage over Getafe into aggregate victory on Thursday.