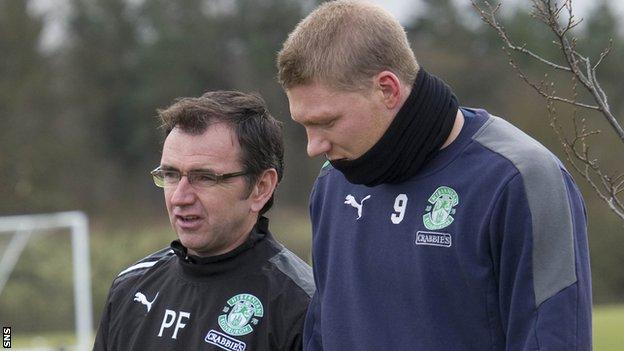 Former Hibernian striker Garry O'Connor has described Pat Fenlon as the worst manager he ever worked under.

And O'Connor says Fenlon was the main reason he left Easter Road that summer.

Asked who was his worst manager, he said: "I'll tell you, Pat Fenlon. His tactics - I felt that he killed us in that Scottish Cup final."

O'Connor, had returned to Hibs after spells with Lokomotiv Moscow, Birmingham City and Barnsley.

But he ended his second spell with his boyhood favourites when he rejected a contract extension and instead joined Russian second-tier outfit Tom Tomsk following the Hampden defeat.

"Leading up to the final, Fenlon had about three different teams and we had a lot of issues in the hotel before the game with bonuses and players not being in the squad," he told BBC Scotland.

"It's not what you need before a Scottish Cup final basically and I don't think he handled it very well and that's why I didn't sign the second time around."

Since Fenlon left Easter Road, Hibs have only lost twice in 10 outings under Terry Butcher and O'Connor thinks many of the players there were unsettled under the Irishman.

O'Connor himself did not enjoy working under Fenlon despite the manager steering the club clear of relegation trouble in his first season with the Edinburgh club.

"The year he came in, we got safe and the year after we got a better finish, but in my eyes it was the wrong decision to bring Pat in," said the striker.

"I didn't enjoy my time with him and they've got the right man now in Terry Butcher.

"The season I was there, the players definitely lost faith in him and a few of the boys will tell you that."

O'Connor admits that the decision to leave Hibs proved to be a disaster personally.

"I was offered another deal after my second spell when I went to Russia," he said.

"I decided to go abroad again, which was probably the wrong move.

"Plain and simple, it was down to money. It was a good wage - I am still waiting on it like!"

O'Connor had won the Russian Cup, scoring the winner in the final, while with Lokomotiv.

"I had been out in Russia before and enjoyed it the first time," he added.

"It was a fantastic experience for a young boy to go over there and experience a different culture.

"The second time wasn't great. Lack of payment, it was in Siberia, it was freezing cold and I was away from the family constantly and nobody could speak English.