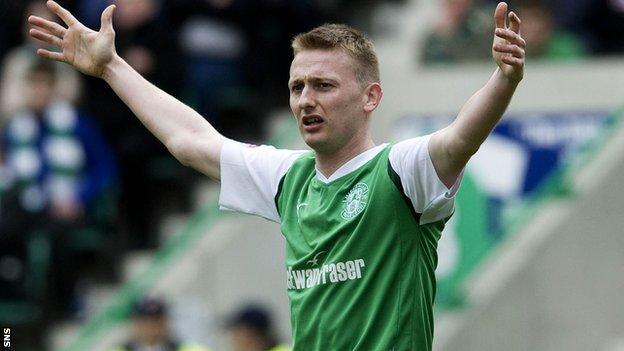 Former Scotland forward Derek Riordan cannot fathom why some clubs have refused his request to train with them - and even play for them for free.

The 30-year-old has been without a club since being released by Bristol Rovers in December 2012.

"I've asked quite a few clubs for training and it's been a no-go, which I can't understand," said Riordan, who was given a yes by Alloa Athletic.

"It's odd for me. I've offered to play for nothing and nobody's taken it up."

Riordan is the third highest scorer in Scottish Premier League history but is now simply grateful to Alloa manager Paul Hartley for allowing him to train with the part-time Scottish Championship outfit while looking for a club.

"I've changed agents a couple of times and, whether you're getting the right information back, I don't know," Riordan told BBC Scotland.

"It could be that someone's put out a bad word about me. I think I've only had one breach of the peace charge in my life, so it's not exactly that bad.

I am definitely fit enough. I could play tomorrow if I wanted

"I don't know what it is. It is quite frustrating.

"I've been dying to get back into football since the summer.

"I've been at training at Alloa the last 10-11 weeks and been enjoying it there.

"I am definitely fit enough. I could play tomorrow if I wanted."

But Alloa boss Paul Hartley recently told BBC Scotland that fitness was an issue for Riordan, when asked why he hadn't taken a chance on the forward.

Edinburgh-born Riordan, capped three times, had two spells with boyhood heroes Hibernian, with two years with Celtic sandwiched in between.

And he claimed that Hibs chairman Rod Petrie turned down his request for training facilities.

"I phoned Rod myself and asked to go in training, but he said no because of what I said in the paper about the current team under Pat Fenlon," he said.

"I was only saying it as a Hibs fan. I had not been back to see Hibs after the 5-1 defeat by Hearts in the Scottish Cup final."

Riordan admits that leaving Easter Road for Chinese club Shaanxi Chan-Ba in 2011 had not helped his career and there followed disappointing spells with St Johnstone and in England's League Two with Rovers.

However, former Hibs team-mate Garry O'Connor is hopeful that their partnership could be reignited at Morton.

The striker made his debut for the Scottish Championship strugglers on Saturday and has discussed Riordan's position with manager Kenny Shiels.

"It would be fantastic to have Deeks on board, but I'm afraid I can't make that decision," said O'Connor.

"Obviously Kenny has spoken to me about Deeks' situation and, I'm not sure, maybe Kenny will give him a call."