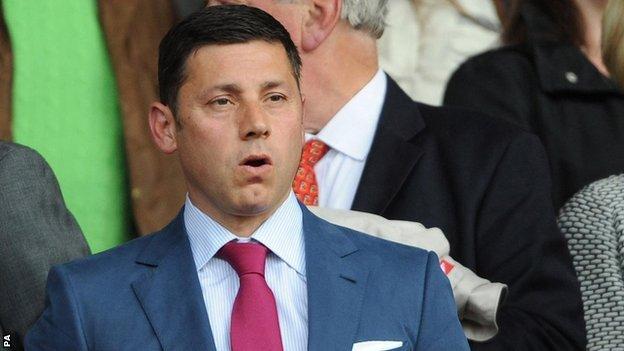 When the end came, Nicola Cortese only had time to say goodbye to those closest to him at Southampton.

There was emotion, on both sides, as he said goodbye to manager Mauricio Pochettino, the club secretary and his personal assistant among others.

It was a scenario they feared had been possible since it became clear Cortese's vision and the one held by the club's reclusive owner, Katharina Liebherr, were worlds apart.

In recent weeks, his appearances at the training ground, often before seven in the morning, had grown less frequent. Something had changed, something was wrong.

On Tuesday, those hunches were confirmed in the most dramatic of circumstances when Liebherr replaced the Italian and installed herself as chairman. But many were left asking 'why?'

This was not an argument over transfer funds, wages or the need for investment. This was not a snap decision or a row that had flared up suddenly. Cortese was not tempted by offers from abroad or new challenges.

No, the dispute that ended his five-year spell at Southampton was about the sale of the club.

The problems began at the end of last season and although an uneasy truce was reached in May, by the time the season had begun, it was clear all was not well. Liebherr, who was left the club by her father Marcus following his sudden death in 2010, had no interest in Southampton and no knowledge of football - she wanted to sell the club.

Cortese was open to that, but his preference for a sale in two or three years was at odds with Liebherr's desire for an immediate sale.

The 'why' is incidental now. The focus has instead turned to what it might mean for the club, the manager and their players.

The bond between Cortese and Pochettino is well publicised. The former Swiss banker had been on a scouting mission on the continent when the sheer enthusiasm and passion of a manager on the touchline below caught his eye.

Six months passed, during which time thorough research was conducted on the Argentine, and when the time came to replace previous manager Nigel Adkins, Cortese knew exactly who he wanted.

Within moments of their first meeting, both men knew the fit was right. It was not a risk; it was, like everything else, carefully planned.

The players bought into his vision, wholeheartedly. So much so, that at least one leading Southampton player has a clause in his contract that links his own future to Cortese's. The worst case scenario for the club is that manager follows chairman and players follow manager.

A presentation to the players in April last year did not ask if Southampton can win the Premier League, but how can they win it?

This was Cortese's vision for Southampton, one shared by Pochettino, by defender Luke Shaw, by midfielder Adam Lallana, and by forward Jay Rodriguez and the rest.

Nothing was left to chance. Everything was planned, analysed, discussed. The club's poor away form was one issue. Why did they struggle?

Cortese refused to accept the club's geographical location as an explanation. Players were asked to fill out questionnaires. What time did they wake up at home? What were their habits? Did their children wake them, did the dog? The results were analysed and changes were made.

Saints march to the top flight

Then the 45-year-old focused on the environment. Now, when Southampton travel away from home, the hotel is often booked for two nights rather than one. On the first night, club staff arrive and clean the already pristine rooms. They vacuum up every particle of dust that might cause illness or carry a bug.

Then bespoke mattresses are placed on each bed, tailored to each player. The duvets, the pillow cases and the sheets are washed and ironed by the club, using the same washing powder and the same methods. Wherever the players are, their bed smells and feels the same.

The same applies to food, with the club chef travelling ahead of the squad to each and every hotel. Marginal gains were everything to Cortese.

On the field, the whole team, rather than just the defence and goalkeeper, were awarded clean sheet bonuses in order to promote a team ethic, rather than any division.

And yet divisions off the field could not be avoided. Southampton fans will do their best to ignore the thought of the worst case scenario - chairman, manager, star players and ultimately an owner disappearing in a blur.

Still, the unwillingness of this intensely private man to become a public figure meant some found him hard to like, or at least to understand, especially after the sacking of Adkins, almost a year ago, who had guided the club to the top flight from League One.

And while it may be too soon to declare Southampton a club in full-blown crisis, what no-one can question, is that the impact of Cortese's departure will be felt long after the ink has dried on his severance agreement. Love him or loathe him - he will be missed.