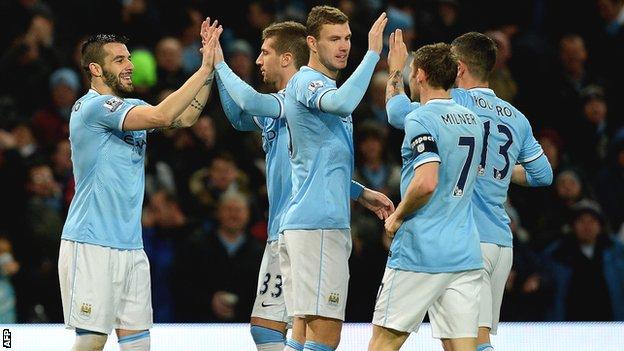 Blackburn manager Gary Bowyer believes Manchester City are the "best team in the world at the moment" after Rovers were hammered 5-0 in the FA Cup.

City kept hopes of an alive with a dominant display in

Bowyer told BBC Radio Lancashire: "I've nothing but pride because our boys didn't die and they didn't freeze.

"We were playing against a world-class team. They're probably the best team in the world at the moment."

Alvaro Negredo and Edin Dzeko both scored twice at the Etihad Stadium, while with a goal within a minute of coming on as a second-half substitute.

Manuel Pellegrini's side have now scored 99 goals in their 33 matches in all competitions this term, although Rovers had managed to keep out their prolific hosts until the dying seconds of the first half, when Spanish striker Negredo headed City in front.

"They were probably a bit naive to concede on the stroke of half-time and that's something you have to learn when you play these clinical people," continued Bowyer, who confirmed that captain Scott Dann and top scorer Jordan Rhodes missed the game at the Etihad Stadium because of injury.

"The response was great from our boys. We kept trying to play at the right times and [City goalkeeper Costel] Pantilimon has made a very good save from Josh King."

Blackburn will assess the hamstring injury suffered by goalkeeper Paul Robinson in the lead-up to their Championship fixture at Nottingham Forest on Saturday.

The former England international was replaced at half-time by Simon Eastwood.

Robinson has recently returned to action after several months out, after