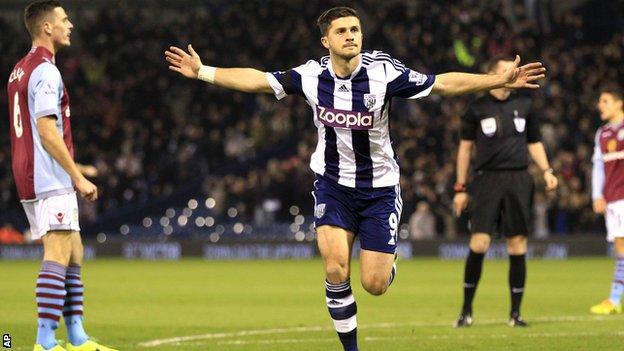 Hull City have completed the signing of striker Shane Long from West Brom.

The 26-year-old has signed a three-and-half-year-deal for an undisclosed fee, although it is understood to be a deal that could rise to £7m.

"It's a club that's on the up, and I'm delighted to be a part of that. I finally got the deal signed," said Long, who almost joined the Tigers on transfer deadline day in September.

After meeting the manager, and respecting what he's done as a player and a manager, I was happy to start a new part of my career here

The Republic of Ireland forward scored 22 goals in 87 games for West Brom.

"I'm lucky that I've had a few inside informers letting me know what it's like up here. They all love it up here, and they're excited by what is happening at the club.

"After meeting the manager [Steve Bruce], and respecting what he's done as a player and a manager, I was happy to start a new part of my career here and hopefully I can score a few goals to take us further up the league."

West Brom sporting director Richard Garlick said the club was disappointed to lose a player who had 18 months left on his deal.

"We began talking to Shane about a new contract last spring and, during the ongoing negotiations, we made two offers which would have significantly increased his salary," he added

Long, who has scored 10 goals in 43 caps, follows Everton striker Nikica Jelavic to Hull after the Croatia international joined the Tigers on Wednesday.

The former Cork and Reading striker had a medical at the KC Stadium on 2 September, but then-West Brom manager Steve Clarke blocked the transfer, despite signing both Stephane Sessegnon and Victor Anichebe on the same day.

With Romelu Lukaku, Peter Odemwingie and Long gone, West Brom have lost players who scored 30 of their 53 league goals in 2012-13.

Long failed to score in his first eight appearances for the club this season, before netting his only three league goals of the campaign against Chelsea and Aston Villa in November.

Despite playing a full 90 minutes on Saturday as Albion were beaten 1-0 in the Premier League at Southampton in front of new boss Pepe Mel, who watched from the stands, Long could not be persuaded to stay at The Hawthorns.

"Shane effectively only has 18 months left on his deal and with him no closer to accepting our terms and then Hull making an acceptable offer, we felt it was in the club's best interests to accept the bid," added Garlick.

On Thursday, Hull sold Aaron Mclean to League One side Bradford for an undisclosed fee, while fellow striker Gedo returned to Al Ahly after ending his loan spell in England six months early.