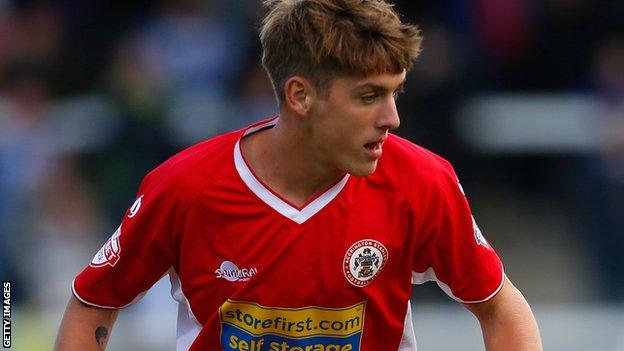 Accrington manager James Beattie admits he is likely to fail in his attempts to bring teenager Connor Mahoney back to the club on loan from Blackburn.

The 16-year-old winger from the League Two side in December.

Beattie had hoped Mahoney would return on a temporary basis, but has been told by Rovers boss Gary Bowyer that the player is in his first-team plans.

"I knew what a special player they [Blackburn] were getting," Beattie told BBC Radio Lancashire.

"His standing within the club now shows you that. He's done very well since he went there and I know Gary is very impressed with him."

Mahoney, who turns 17 in February, featured six times for Stanley this season before making the switch across east Lancashire to Ewood Park.

On Wednesday, he became the third youngest debutant in Blackburn's history when he appeared as a late substitute in their

Former England striker Beattie continued: "I desperately tried to get him back on loan, but the way he's performed since he's gone in means he's in and around their first-team squad.

"He showed a little bit of what he's got on Wednesday night, even when he came on in the dying seconds."

Bowyer was similarly pleased with the youngster, saying after the game: "I was delighted with his performance. He didn't freeze. He's got a lot of work to do but hopefully that will whet his appetite to do really well."

Meanwhile, left-back Lee Naylor has left Accrington by mutual consent after 14 appearances for Stanley. The 33-year-old, who has also played for Wolves, Celtic and Cardiff,